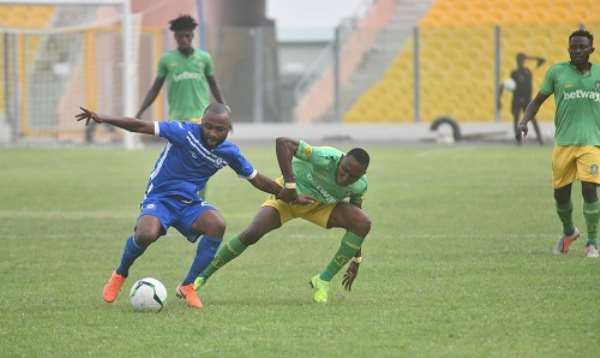 Accra Great Olympics midfielder Gladson Awako, says there is no cause for alarm despite their poor start to the Ghana Premier League season.

Great Olympics have endured a rocky start to the 2019/2020 campaign, which required them to appoint a head coach within three days before the season kicked off.

A 3 – 0 loss to Ashanti Gold on opening day has been followed up with a lone goal defeat to Aduana Stars.

However, with 4 goals conceded and none scored, Awako isn’t perturbed but rather wants to focus on building chemistry within the group.

“It's just the start of the season and you can see its a new group and a new coach.

“We are getting there gradually if you compare our first game against Ash Gold with this one.

“You can tell there is a lot of improvement.
He wants the new manager to be allowed time to teach the players at the club his philosophy.

“We will get there but need a lot of time for the boss to shape up the team.

"We will be better,” he stated after their defeat on match week two.

Olympics are currently bottom of the league log heading into the next round of matches.