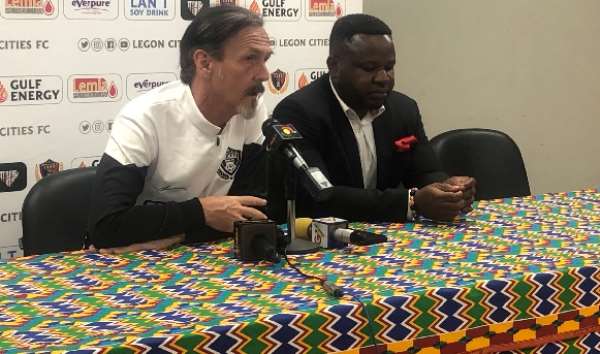 Head coach for Legon Cities FC, Goran Barjaktarevic has admitted that his side lost against Asante Kotoko on Friday in the Ghana Premier League because they did not have the quality to match them.

The two clubs locked horns in a Match Week 2 fixture of the recently started season to fight for 3 points. At the end of a match played under floodlights at the Accra Sports Stadium, the Porcupine Warriors beat the Royals 3-1 to ensure they returned to Kumasi with all points.

Speaking in a post-match interview, Legon Cities FC coach Goran Barjaktarevic shared that he believes they met with Kotoko too early in the season.

“I would like to see the game [results] a little bit different [laughs]. But you know it’s definitely this game came two, three weeks too early”, the gaffer said.

He further stressed that the Reds are far ahead in terms of the quality they possess and that handed them an advantage on the matchday.

“I mean such opponent like Kotoko they are very good, organized, they play a long time together and one big part of the team. And this is exactly the quality that we don’t have. That’s why I say two, three weeks later it will be a better match than today”, coach Goran Barjaktarevic.

Legon Cities FC is now winless in their first two matches of the season and will be hoping to amass their first 3 points in their next outing on Match Week 3 of the 2019/2020 Ghana Premier League.