PL: Liverpool Lean On VAR To Edge Past Wolves 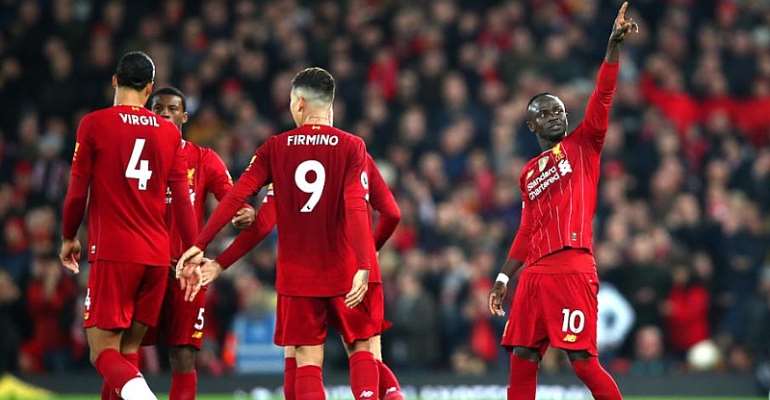 Liverpool continued their relentless march towards a first Premier League title in 30 years, but Jurgen Klopp's men needed the benefit of two VAR reviews to see off Wolves 1-0 at Anfield on Sunday.

Sadio Mane scored the only goal three minutes before halftime as the Senegalese's strike was allowed to stand after initially being ruled out for handball against Adam Lallana.

Moments later Wolves had an equaliser scored by Pedro Neto disallowed by VAR for the tightest of offside decisions.

An 18th win in 19 Premier League games this season re-established Liverpool's 13-point lead at the top of the table and they have a game in hand over closest challengers Leicester.

Wolves were angered even before kick-off with the scheduling that meant they travelled to the European champions just 45 hours after a thrilling 3-2 win over Manchester City.

Liverpool made just one alteration from the side that thrashed Leicester 4-0 in a top-of-the-table clash on Boxing Day to open up a seemingly unassailable lead in the title race.

An extra day's rest for the hosts showed in the early stages as Mohamed Salah, Georginio Wijnaldum, Mane and Roberto Firmino all came close.

FINEST OF MARGINS
The deadlock was finally broken when Mane swept home his 14th goal of the season.

Referee Anthony Taylor ruled the goal out for handball as Lallana knocked the ball into Mane's path, but the English midfielder had instead used his shoulder and the goal was given after a lengthy VAR review.

If Wolves felt hard done by for the opener, they were rightly infuriated again in first-half stoppage time when Neto's equaliser was ruled out.

Jonny was adjudged to be offside by the tiniest of margins to add to a number of Premier League goals over the past two days ruled out for the most marginal of offside calls.

Nuno was booked among the Wolves protestations, but the Portuguese coach's starting line-up meant he had weapons up his sleeve come the second half with the pace of Traore unleashed on the hour mark.

Wolves' top scorer Jimenez followed, but only after Diogo Jota's fierce strike forced Alisson Becker into a smart save.

The visitors had lost just once in their previous 14 league games to move into contention for a top-four finish and they did not go down without a fight in the final stages.

Jimenez had the best chance to claim an equaliser but was denied by a block from Joe Gomez before Joao Moutinho, Romain Saiss, Ruben Vinagre and Traore fired off target.