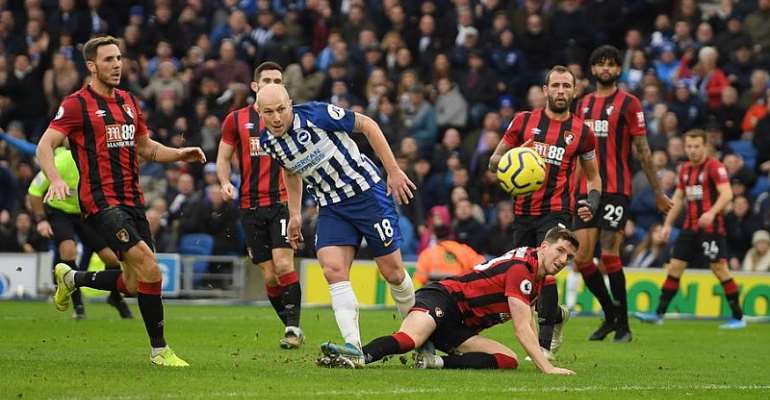 Alireza Jahanbakhsh and Aaron Mooy both broke their goalscoring ducks for Brighton & Hove Albion who returned to winning ways at home with a 2-0 win over Bournemouth in the Premier League on Saturday.

Jahanbakhsh, who was given his first start of the season, repaid Graham Potter's faith in the midfielder by scoring as early as the third minute with a fierce, low strike into the far corner.

It was his first goal for the club since he was signed after last year's World Cup and the overwhelmed Iranian was on the verge of tears.

"It's been a long time coming and I didn't make minutes but I have been waiting for this time for a long time," Jahanbakhsh told BBC Sport. "Before the match, I had a great feeling because I'm playing well and I'm glad to help us win the game.

"Obviously it was an emotional moment for me, I had ups and downs last year, trying to settle. This season it felt good with the new manager."

Bournemouth had a couple of chances to equalise in the first half but Brighton defenders Dan Burn and Lewis Dunk were on hand to make last-ditch blocks as the home side went into the break 1-0 up.

Brighton right-back Dan Burn then thought he had scored his first goal for his club, too, when he put the ball in the back of the net during a scramble in the box. However, VAR disallowed it for a marginal offside call when the set-piece was taken.

Yves Bissouma nearly made it 2-0 to Brighton with a solo run from the centre circle into Bournemouth's box as defenders backed off, but the Malian midfielder saw his low effort come back off the far post.

Mooy capped a man-of-the-match performance by doubling Brighton's lead in the 79th minute when he latched on to Leandro Trossard's pass and took two sublime touches to set himself up for a curling shot that beat goalkeeper Aaron Ramsdale.

The win, Brighton's first at home in four games, lifted them up to 13th in the standings while Bournemouth remained in 16th – two points above the relegation zone – after their seventh loss in nine games to increase the pressure on boss Eddie Howe.

"No complaints about the result," he said. "I thought we took time to settle into the game. We were not at our best, we conceded an early goal.

"The second half was tough... We were slow out of the traps, we conceded a goal which gave us a mountain to climb, but we recovered and should have scored."