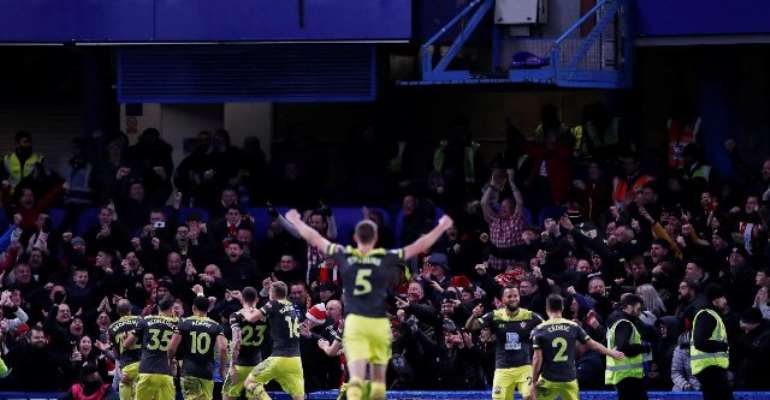 Chelsea vs Southampton
Chelsea lost consecutive home league games for the first time since 2011 as Southampton earned a key win in their fight against relegation at Stamford Bridge.

The home side never got going during the opening 45 minutes and Michael Obafemi's superbly taken strike from 18 yards gave Saints a deserved lead.

The introduction of Mason Mount for defender Kurt Zouma at the break threatened to inject energy into Frank Lampard's side but only a vital Fikayo Tomori intervention prevented the away side a second.

And with 20 minutes remaining, a superb team move saw the ball break for Nathan Redmond and his simple finish from 10 yards wrapped up six points for Ralph Hasenhuttl's side from festive away games at Aston Villa and the Blues.

Bournemouth vs Arsenal
Pierre-Emerick Aubameyang scored his 12th Premier League goal of the season as Arsenal came from behind to draw at Bournemouth in Mikel Arteta's first match in charge of the Gunners.

Midfielder Dan Gosling gave the hosts the lead from close range after Jack Stacey's cut back before Arsenal's captain came to the rescue.

Aubameyang struck with a first-time shot after Reiss Nelson's attempt from the edge of the penalty area deflected into the Gabon forward's path.

The Gunners have won just one of their last 11 league games, and despite watching his side come back to earn a point Arteta has his work cut out.

Everton vs Burnley
Carlo Ancelotti made a winning start as Everton manager as his side edged past Burnley at a packed and passionate Goodison Park.

The 60-year-old Italian, who won the Premier League and FA Cup double as Chelsea boss in 2009-10, took over at Everton last week and received a fantastic reception from the home fans.

Burnley, after two successive wins, nearly scored inside three minutes but Jay Rodriguez's header was cleared off the line by Yerry Mina.

Away goalkeeper Nick Pope did excellently to keep out Mason Holgate's close-range shot and also a later effort from Djibril Sidibe.

But the hosts finally broke the Clarets' brave resistance when Dominic Calvert-Lewin produced an excellent diving header, which went in off the inside of the post, from Sidibe's cross.

The win extends Everton's unbeaten league run to five matches and takes them up to 13th, one place below Burnley.