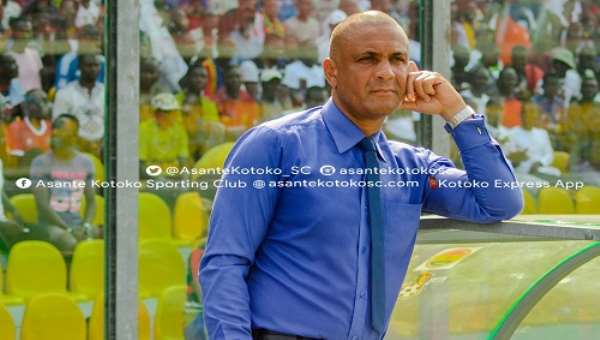 Head coach of Hearts of Oak, Kim Grant has reiterated that he is pleased with his side output despite losing to Asante Kotoko in the president cup.

The Phobians were defeated 2-1 by their arch-rivals at the Baba Yara Stadium on Sunday to lift the ultimate.

Aminu Alhassan own goal drew Kotoko levelled on the stroke of half time after Kofi Kordzi has put Hearts ahead. Naby Keita cemented the victory for the Porcupines following his well-placed header.

Speaking after the game, Kim Grant averred that there is more room for improvement.

''I just thought that the game was pretty tight and they took the chances, we didn't. We had chances. They actually had two chances and they scored them, '' Grant said in his post-match conference.

''Obviously the first half was pretty even. I think there was a bit of nervousness as well. But overall, I was quite pleased, we can still play better.

''But, you know, we have got some young boys in the team and they have to get to be used to the expectations.

''So for me, I was quite pleased with the way we played, but we can still improve on certain matters of the game but I believe that maybe the first goal was offside but that's part and parcel of football.''

Next for the Phobians is to prepare for their league opener against Berekum Chelsea at the Accra Sports Stadium.

Akatsi South: Pastor and wife allegedly killed by unknown as...
55 minutes ago