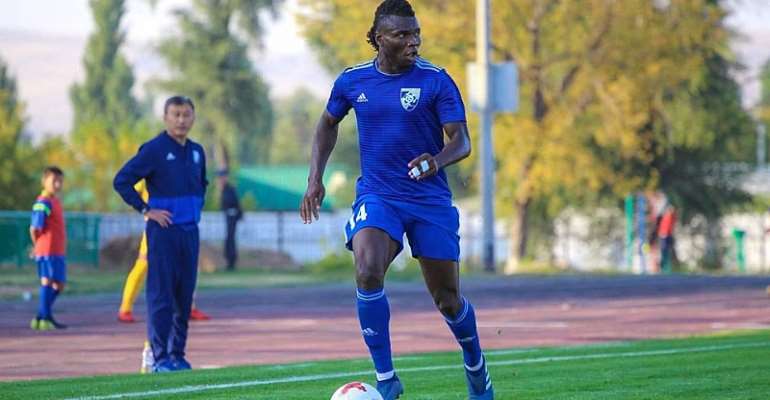 FC Zhetysu Taldykorgan defensive midfielder David Gordon Mawutor has emerged as one of the shining stars in the Kazakhstan Premier League.

The box to box brilliant rising star who has earned him the first-team shirt since joining the top-flight league has been praised for his exceptional ability to provide more scoring options for attackers makes him a midfield powerhouse.

He has been able to find the net two times in 52 games, but his countless assists are what differentiates him from other midfielders.

Quizzed about his readiness for a national team call-up (Black Stars), he simply replied, “I am ready”.

He typifies Chelsea and Ghana legend Michael Essien and has the strong conviction that his inclusion in the Stars will make a huge difference.

“It is every player’s dream to wear the national colours. l am ready any time to respond to the national call, l have been looking forward to that chance, and promise to grab that opportunity with both hands.”

The young rising star said, “l believe in the saying that when preparation meets opportunity, success is guaranteed, so I’m really working hard to achieve that objective.”

He praised the efforts of middle -placed club, and commended his teammates as well as technical staff for their support.

The Ghanaian-born Tajikistani footballer was a former Division Two campaigner in Ghana at YF Juventus in Accra.

He was selected in the Ghana National Under 12 team while a colts player at Brazil Juvenile Football Club at Mamprobi.

His dream has always been to don the national colours, and it seems to be realizing.