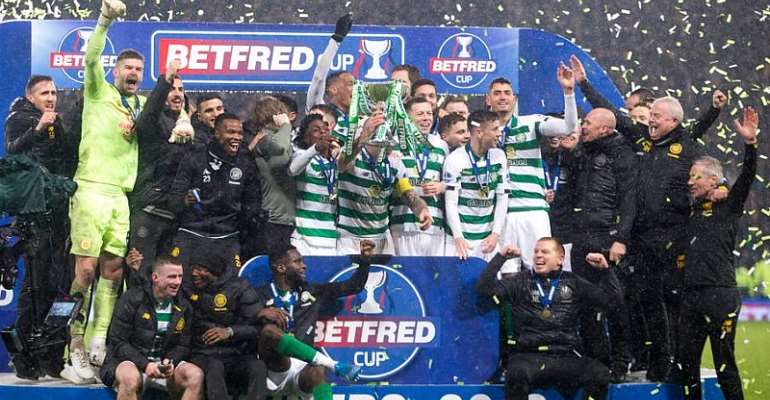 Christopher Jullien scored the only goal on the hour mark, but Neil Lennon's men had goalkeeper Fraser Forster to thank for a string of saves, including from Alfredo Morelos' second-half penalty after Jeremie Frimpong was sent off for bringing down the Colombian striker.

Rangers enjoyed by far the better of the play and the chances even when Celtic had their full compliment but could not find a way past the inspired Forster and remain without a major trophy since 2011.

"Finals are normally decided on big moments and the big moments have not gone in our favour today," said Gerrard, who was furious that Jullien's goal was allowed to stand despite the French centre-back scoring from an offside position.

"There's three of them standing in an offside position, but unfortunately we play in a league with no VAR."

Scottish football does not have VAR in any competition, but Gerrard believes officials need the extra help it would offer.

"I'd be a liar if I said I was 100 per cent in favour of it (VAR), but the one thing I do know is that officials up here need support," added the former Liverpool captain.

A torrential downpour made playing football on the ground difficult, but what little there was came from Rangers, who could have been out of sight by halftime if not for Forster.

The giant former England international made a brilliant save from Ryan Jack's long-range effort before denying Morelos three times before the break.

"I've not seen a goalkeeper like him for a long time," said Lennon of the on-loan Southampton stopper.

"We're grateful to have him, he's thrilled to be here and we needed him today. He just stood up and made saves other goalkeeper just can't make."

MORELOS FOILED BY FORSTER
Celtic were shorn of star striker Odsonne Edouard from the start due to a niggling injury, but the French under-21 international was summoned from the bench on the hour mark.

With his first involvement, Edouard won the free-kick from which Celtic went in front in controversial fashion.

Jullien did brilliantly to turn in Ryan Christie's free-kick but should have been flagged for offside.

Rangers were handed a lifeline moments after going behind as Frimpong hauled down Morelos inside the box and was sent off for making no attempt to play the ball as he conceded the penalty.

Morelos has scored 25 goals this season but has still not scored in 10 appearances against Celtic as Forster saved his spot-kick after Gerrard stripped captain James Tavernier of penalty duties to hand his in-form striker the responsibility.

Despite their numerical disadvantage, Celtic looked the most comfortable they had all game in the final stages and could even have added a second when Edouard put Mikey Johnston clean through on goal only for the substitute to slice his shot horribly wide.

"I'm thrilled," added Lennon "We had to dig in today. I don't think we played well and had to rely on Fraser to make some world-class saves.

"The character, the pride and resilience they had to show today is something they do not often get asked at domestic level, but they showed it in abundance today."

Witness confirms Dampare’s involvement in the arrest of Abua...
38 minutes ago