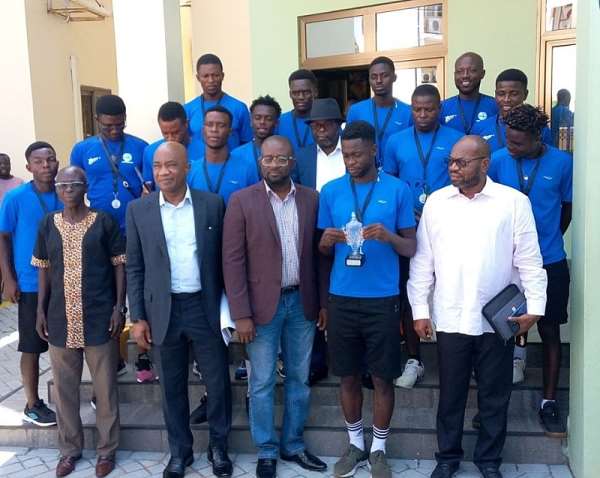 Sunset Beach Soccer Club base in the Volta region, players and officials have presented laurels they won at 2019 Copa Lagos to GFA president Kurt E. S. Okraku in Accra.

The beach soccer trophy is the first title to be recorded under the new Gfa administration after two weeks in office.

The 3 times reigning Ghanaian champions scored a tournament-record 23 goals including a 15-3 demolition of the Pepsi Football Academy on their way to defeating all their opponents in Lagos.

Present at the meeting were Yaw Ampofo Ankrah, president of Ghana Beach Soccer, Mark Addo, vice president of the GFA, George Amoako, an ExCo member and Francis Oti Akenteng of the technical department of the GFA.

He urged them to train harder and play better to retain the title at the next tournament.

Young football administrator, Dzidodo Ruben Adjahoe is the CEO of Keta Sunset BSC. He appealed to the sports authorities to support people who are investing in sports.