Romelu Lukaku Before The BVB-Dortmund Game: The Man Who Wanted To "Destroy" His Opponents 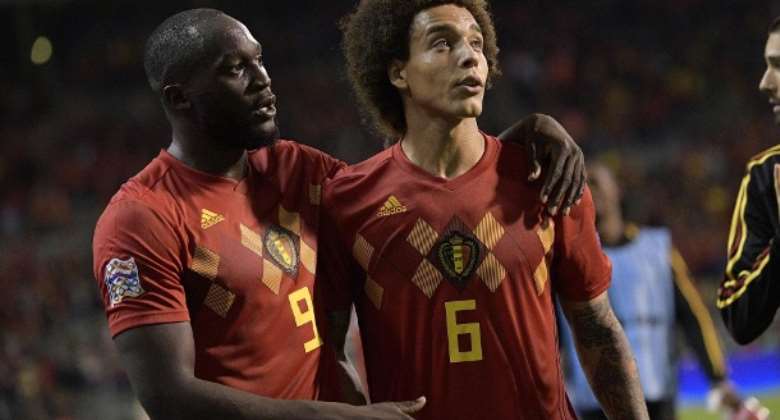 Everything is still open in the BVB Champions League group. Every point counts. The Borussians have to play in Milan on the third matchday. There a world star is waiting for them, whose career was inspired by rage.

As a child Romelu Lukaku was so angry that he wanted to "destroy" his opponents on the pitch. Who knows if this will still be the case when he meets one of his best friends, Inter Milan, in the Champions League on Wednesday. With BVB star Axel Witsel, the striker has experienced the rise of the Belgian national team. In Russia there was third place at the World Cup. Last week, the two secured qualification for the European Championship with their 9-0 win over San Marino - and thanks to his double pack, Lukaku has become the best Belgian scorer of all time (51 goals).

His "anger" has eased over the years, by the way. Now it's just a memory, but it also helps to understand what kind of player Lukaku is. Because without anger his story would probably look quite different. Without anger, he might not have kept the promise he attributes his success to.

Difficult childhood
Lukaku doesn't like to talk about his childhood: "I grew up in difficult circumstances, but that also had a positive meaning," said the striker in an interview with t-online.de in August. He told his whole story in a guest article for "The Player's Tribune". There he describes a scene that has decisively influenced his life.

Lukaku describes his mother standing in front of the fridge diluting milk with water because there was no money for a new pack. Little Romelu was only six years old at the time and promised to put his mother out of her misery through football.

His football talent is in his genes. His father Roger had kicked as a professional in Africa, Belgium and Turkey, his brother Jordan has also become a professional and now plays as an outside defender for Lazio Rome. But Romelu didn't notice much of his father's success. When he was a child, Roger Lukaku's career was at an end. The money? Away. First the television disappeared in the house, then the electricity and the warm water. "To take a shower, my mother warmed the water on the stove, then I poured it over my head with a cup," Lukaku said. Football was the way out.

How old are you?
Lukaku is a powerful striker who is physically superior to almost any defender. Already at the age of eleven he was taller and stronger than the other children. "Before a game with my youth club Lièrse, the parents of my opponents once tried to stop me on the way to the field. They wanted to know how old I was and where I came from. That sounded insane to me: "I was born in Antwerp, I come from Belgium," Lukaku said.

His father couldn't defend him because he didn't have a car to drive to his son's away games. So young Romelu took his passport out of his pocket and showed it to all his parents. "I felt my anger getting bigger and bigger. I didn't just want to defeat the opponents, I wanted to destroy them. I wanted them to drive their crying child home." The consequence? That season he scored 76 goals in 34 games, all with his father's shoes on.

His big goal was to play for the first team on his 16th birthday. At the beginning of the 2008/09 season, however, he was in the U19 squad at RSC Anderlecht - and just sat on the bench. Packed with ambition, he made a bet with the coach.

If the coach used him, he would score 25 goals by December. "And if I win, you do pancakes for us every day," Lukaku added. He had already scored the 25 goals in November and the coach had no choice but to pick up the pan. When he finally made his professional football debut on 24 May 2009, his 16th birthday was only eleven days ago.

Even as a striker for RSC Anderlecht, Romelu Lukaku collected one award after another.

His Change to England
After scoring 22 goals in 55 games for Anderlecht, Lukaku moved to Chelsea FC in 2011, where he only played eight times under coach André Villas-Boas. That's why he was awarded to West Bromwich Albion in 2012, where he scored 17 goals in 55 games. But the best was yet to come: It was in Liverpool, Everton FC, where he made his breakthrough in the Premier League.

Under coach Roberto Martínez (now Belgium's national coach) - and then later Ronald Koeman - he broke a series of club records and scored a total of 87 goals in 166 games. The move to Manchester United in summer 2017 for 85 million euros should be another step forward in his career.

With ten goals in the first nine games, he even improved on the record set by club legend Bobby Charlton and helped José Mourinho's team to second place - even though the Red Devils were 19 points behind city rivals Manchester City. The following season, Manchester United went into chaos: Mourinho was fired in December 2018 and the team was entrusted to Ole Gunnar Solskjaer. But: The new coach appreciated Lukaku less than his predecessor and preferred Marcus Rashford.

New challenges
That's how he ended up in Italy in the summer at Inter Milan. Again he became a record transfer. Inter Milan spent 75 million euros on him, the highest transfer in the history of the club. The new and ambitious coach of the "Nerazzurri", Antonio Conte, would have liked to have brought Lukaku back to Chelsea FC when he was coach there.

The footsteps Lukaku found at Inter could hardly be bigger. His predecessor was crowd favourites and superstar Mauro Icardi, who was on the verge of being eliminated in Milan and finally moved to Paris.

And so far Lukaku is doing very well. He already has five goals to his name after eight league games. In the Champions League he's still without a goal, but that's about to change against BVB. Because coach Conte relies on him. With his physical strength (1.91m, 94kg) he forces the defenders to cover him twice, because a free Lukaku is always dangerous to score.

Beside the place he is considered as a quiet, reserved type. Football is not only his profession, but also his favourite hobby: In his free time he likes to compete in 5-against-5 duels. On television, he watches matches from all countries and leagues, including the 2nd National league. Perhaps a late satisfaction for his childhood, when the family could not afford a television.