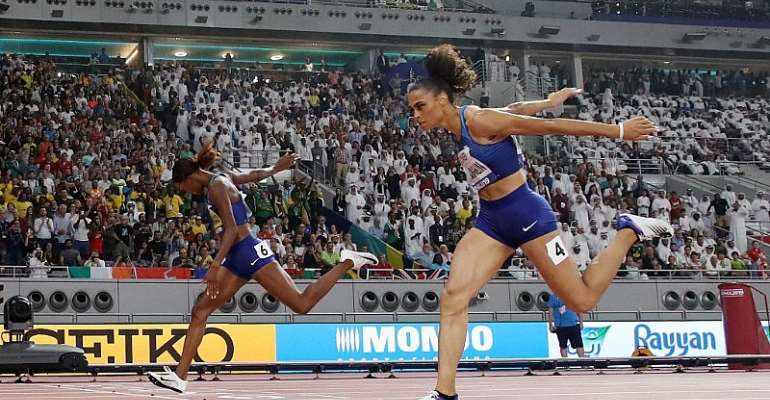 Dalilah Muhammad broke her world record of 52.20 seconds on Friday night as she claimed the 400m hurdles title at the world championships in Doha. The 29-year-old American finished in 52.16 seconds. Her compatriot, Sydney McLaughlin, was a fraction behind her in a personal best of 52.13.

Muhammad set the old mark at the US trials in Iowa in July. Drawn in lane six at the Khalifa International Stadium, she set off seemingly on a mission to smash her summer high.

The 2016 Olympic champion was in front heading into the home straight and just had enough power to thwart McLaughlin's late surge.

Desire
“I can't tell you how much this means to me,” she said. “I really wanted the world title and to get it and a world record is absolutely wonderful.

"I put a lot of pressure on myself and so I decided to go out fast. I felt Sydney coming closer after the ninth hurdle but I just pushed again with all that I had. I didn't know who was first over the line."

The older of the dynamic duo was by the finest of margins.

Speed
“I knew the race would be fast,” said McLaughlin. “But I didn't think it would be that fast,” added the 20-year-old.

“I gave everything I had and at least the US has a gold and a silver. I'm still young and I've learned so much during these championships.”

While Muhammad added a ninth gold to the American team's coffers, the home crowds were able to celebrate their first gold of the championships when Mutaz Essa Barshim retained his high jump title with a leap of 2.37m.

Conseslus Kipruto from Kenya also defended his crown. But it was close. He finished the 3000 metres steeplechase in 8:01.35 seconds. Ethiopia's Lamecha Girma was timed at 8:01.36.

Dedication
Steven Gardiner's victory in the 400m was, by contrast, a tad more comfortable. The 24-year-old from the Bahamas swept home in a national record of 43.48 seconds. Anthony José Zambrano from Colombia was second in 44.15 and Fred Kerley collected bronze for the United States.

Gardiner, from Abaco, dedicated his triumph to the inhabitants of the islands devastated by Hurricane Dorian in September.

“I didn't want to think about it too much," he said. “I spoke to my friends and family before the race. They told me that I should just give my best. I did. I'm world champion now. This gold medal is for them."