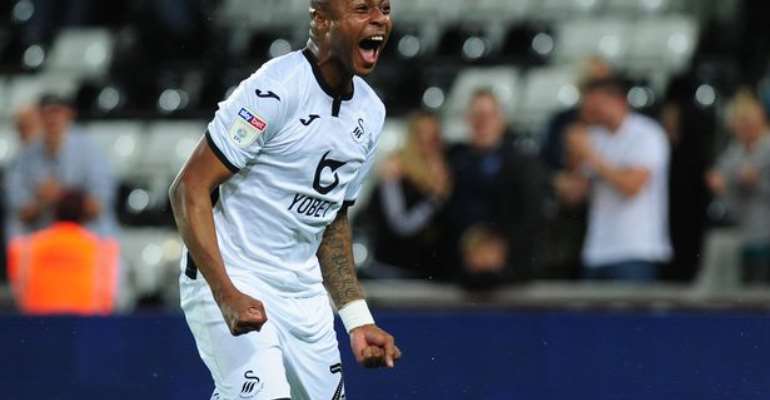 Swansea City manager, Steve Cooper has confirmed that Andre Ayew had offers to leave the club but decided to stay because he had faith in the project of the club.

The 29-year-old forward was linked away from the club during the summer transfer window but refused to move on transfer deadline day.

Lazio, Fiorentina, Marseille among other German Bundesliga clubs were all in race for Andre's signature.

However, reports also emerged that the Swans had been eager to offload the Ghana international in the summer in a bid to further reduce the wage bill.

However, the former West Ham ace made an instant impact on his return to Swansea's first team, scoring a brace in a 3-1 Carabao Cup win over Northampton Town last month.

"Andre’s a high-profile player here at Swansea and in the Championship and he did have offers. He could have gone. But the most important thing to say is that he’s wanted to stay because he believes in what we’re doing and he wants to be a part of it," added Cooper.

"My gut feeling was that that would be the case. I just saw a really motivated player every single day.

"My experience of Andre, as with all the players, have only been positive. He’s obviously a talented player, he's making a difference in game and he's performing well, but he’s also captain of his national team, he has experience and has been more than willing to share that and trying to get the best out of others.

"I've really enjoyed my conversations with him, he understands the game and I look forward to working with him.

"The key to everything is motivation. If you're motivated then you get the best out of yourself. With him staying he’s obviously motivated to do well here and if he does that I think everybody will be a winner, especially him."