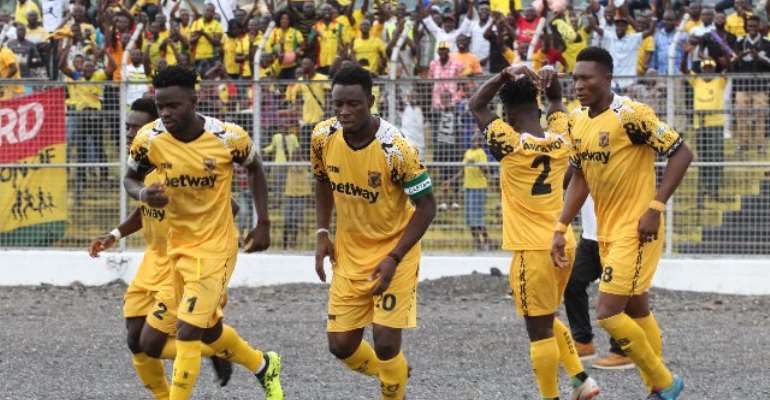 Ghana’s AshantiGold are up against Morocco’s RS Berkane in their CAF Confederation Cup first round first leg clash on Saturday.

The Miners, who are back in continental action for the first time in 2006, defeated Equatoguinean side Akonangui FC in the preliminary round.

After a 1-1 draw in the first leg, captain Shafiu Mumuni scored a 10-minute hat-trick in Obuasi as the Ashgold won the return leg 3-0 and qualify 4-1 on aggregate.

For Berkane, they drew a bye in the preliminary stage after reaching the final last season.

What is the kickoff time?
The match will start at exactly 15:00 GMT (3 pm).
Current form of both teams:
AshantiGold are in good spirits ahead of the fixture after securing the BK Edusei Cup trophy at the expense of Asante Kotoko.

They managed to beat the Kumasi based side 4-3 on penalties after a goalless score in regulation time.

The Miners also scored four without reply in their most recent friendly match against Tema Youth.

On the competitive front, AshantiGold have won three of their last five games (W3 D1 L1).

RSB Berkane have been on a bad run in competitive outings, winning just once in their last five matches (W1 D2 L2).

Their only victory came four months ago against Zamalek in the first leg of the CAF Confederations Cup final (1-0).

The Oranges’ second-leg loss to Zamalek was perhaps the most painful as the White Knights clinched the trophy.

They were also recently subjected to an early exit from the Moroccan throne Cup by Chabab Atlas Khenifra, a competition they managed to win last year.

The Moroccan side will hope to end their wait for a victory in Obuasi.

Team News:
Ricardo Da Rocha’s men engaged in a friendly with Tema Youth last Saturday in search of fitness and the players ended the match without complications.

The Oranges are reported to have all their players available for this match.