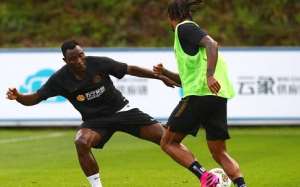 Ghana ace, Kwadwo Asamoah has implored his Inter Milan teammates to continue giving out their best as they play their next game in the Serie A.

The 29-year-old played the entire duration of their opening Serie A campaign on Sunday which saw Antonio Conte’s side beating Lecce 4-0.

The Nerazzurri would take on Cagliari in their next game over the weekend and the ex-Juventus star has urged his teammates to maintain the same momentum to ensure victory.

“Preparing is the best way for the match on Sunday”, his tweet said and he is expected to play a key role in their upcoming game.

The 2010 UEFA Champions League winners are looking forward to grabbing six points from a possible six before the season’s first international break when they travel to the Sardegna Arena.

Decision To Let Us Manage Ambulances Laudable--Ambulance Ser...
1 hour ago