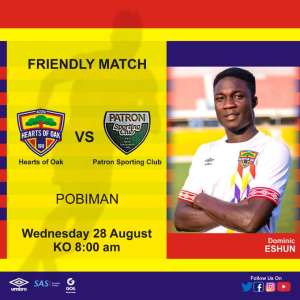 Ghana Premier League giants, Accra Hearts of Oak has confirmed that they will be engaging lower division side Patron Sporting Club in a friendly match at the Pobiman Park on Wednesday morning.

In a game that was played at the Swedru Sports Stadium, goals from Christopher Bonney and new addition Richard Arthur was enough to push aside the opponent of the Phobians.

Up next for Kim Grant and his men, they will welcome Patron SC to their Pobiman training facility for another pre-season game.

The match will be used to assess the fitness level of players and also give the Hearts of Oak gaffer an opportunity to sharpen any rough edge in his team as they intensify preparations for their crunch meeting with bitterest rivals Kumasi Asante Kotoko in the President’s Cup next month.