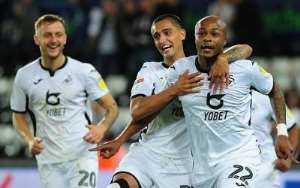 Modernghana Sports can exclusively report that German Bundesliga side Werder Bremen and Italian Serie A side Sampdoria has stepped up their chase to sign Black Stars Captain Andre Dede Ayew from Swansea City.

The attacker has been at the center of transfer speculations since his return to his parent club following his exploits with Ghana at the 2019 Africa Cup of Nations (AFCON) where they disappointingly got knocked out at the round of 16 stage.

Despite the uncertainty surrounding his future at the Championship club, Andre Dede Ayew has been playing some fine football and has contributed immensely to the good run of form exhibited by Swansea in the ongoing season.

According to checks, the attacker has attracted interest from Werder Bremen and Sampdoria who are keen on securing his services before the transfer window shuts in their country.

It is however understood that talks between the two clubs and Swansea City are yet to reach an advanced stage due to the players £80,000-a-week wage bill.

Ayew remains under contract with the Swans and has expressed his readiness to feature for the side in the ongoing campaign to help them gain promotion to the English Premier League at the end of the season.