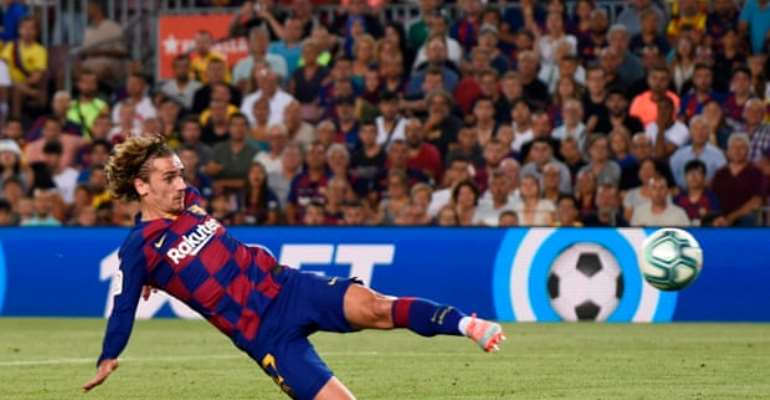 Atletico Madrid made it two wins from two, there was a familiar look to Zinedine Zidane’s Real Madrid and Barcelona fans were treated to a glimpse of the future in the absence of Lionel Messi and Luis Suarez.

Here are five talking points from the weekend’s action in Spain:

Back to the future for Real When Zinedine Zidane returned to Real Madrid in March he did so with pledges of "revolution, not evolution" as local media were briefed that he had only agreed to return on the basis he was given control of the club’s transfers and would be allowed to shape a squad in his image.

Having spent over 300 million euros ($334 million) on four players, that promise somewhat rings true. Yet, with the man whom the bulk of that money was splurged on - Eden Hazard - out injured, there was a distinct lack of the new Madrid that had been promised as Real meekly drew 1-1 with Valladolid in their first home game of the season.

Thibaut Courtois was the only member of the starting XI who did not belong to the club when they lifted the first of their three Champions League titles under Zidane in 2016, while outcasts James Rodriguez and Gareth Bale were also handed starts. The transfer window does not close until Sept. 2, but it appears to be a case of back to the future for Real and their old guard.

New look Atleti, same old Atleti The same cannot be said of cross-town rivals Atletico Madrid, who have welcomed nine new faces into the squad after losing three of their first-choice back four, as well as leading forward Antoine Griezmann since the end of last season.

Diego Simeone’s side are certainly a new-look Atleti, even if their fundamentals are the same. They are still playing his favoured 4-4-2 formation, with four largely central players clogging up the middle of the park and new full-backs providing the width.

But as the saying goes, "If it ain't broke, don’t fix it". The newcomers at the Wanda Metropolitano have adapted like ducks to water and they have won both games 1-0 to be one of only two sides with a 100% record in La Liga.

Griezmann and the Barca of tomorrow After a shock defeat by Athletic Bilbao in their first match of the season, all eyes were on a wounded Barcelona side facing Real Betis without attacking trio Lionel Messi, Luis Suarez and Ousmane Dembele.

Things started badly, with Nabil Fekir putting the visitors 1-0 up early on, but Griezmann grabbed his side by the scruff of the neck, netting two sublime goals and setting up another to show the kind of leadership in Messi’s absence that the Catalans have sorely lacked in the recent past as they went on to win 5-2.

Alongside the Frenchman, 21-year-old Carles Perez impressed on his first start, scoring a sublime goal. Coach Ernesto Valverde was also able to give fans a glimpse of the Barca of tomorrow as Ansu Fati became the club’s second-youngest player at 16 years and 298 days.

Lopetegui hits the ground running at Sevilla
The only way people would have put money on Julen Lopetegui’s side leading La Liga at this early stage was if he was still in charge of Real Madrid. That ship has long sailed, but the former Spain and Real coach looks like he has finally found a home at Sevilla.

Setting up with a progressive 4-3-3 formation, he has managed to blend a mix of new arrivals and old heads and more impressively has won both league matches despite them both being played away from home.

They will fancy their chances of going into the international break top of the pile after hosting Celta Vigo next weekend and given Valencia’s early-season slip-ups, they could be poised to push on and to try to claim a place in the top four.

Odegaard finally gets to show La Liga what he is about When Martin Odegaard joined Real Madrid as the world’s most-talked-about 16-year-old in 2015, nobody expected it would take him until the 2019-20 season to score his first La Liga goal. But after four-and-a-half years in limbo since his sole substitute league appearance for his parent club, which has included loan spells in the Netherlands before joining Real Sociedad on a temporary basis this summer, the Norwegian has announced himself to Spain’s top flight.

In netting the winner for Sociedad against Mallorca the 20-year-old showcased his pace, directness and technique with a sublimely taken goal and he will hope to use that as a catalyst to kick-start his career in Spain.