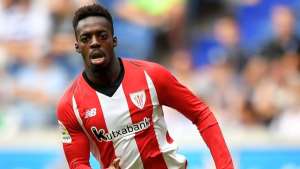 Spanish-born Ghanaian international, Inaki William has committed his future to Spanish La Liga side Athletic Bilbao after signing a new 9-year contract that will see him playing for the club until 2028.

The hardworking attacker is always at the center of transfer speculations during transfer periods and was recently linked with a late move to English Premier League giants Manchester United following the departure of Romelu Lukaku to Inter Milan.

It appears the La Liga outfit values the forward and has decided to tie him down with a long term contract. A €135 million (£125m) release clause has been inserted in the new deal to ward off clubs whiles ensuring they cash in big on the player if he is to leave.

Speaking in an interview with Athletic Bilbao’s website after penning the deal, Inaki Williams shared, “Hopefully great things can come because what I want to make this club bigger, if possible”.

“This, as you can see, is my house, and all I want, I have it here. The club has always bet on me, it has given me everything, I feel it is my home”.

Inaki’s contract becomes one of the lengthiest contract to be ever signed by a player with former Real Betis Brazilian winger, Denilson holding the record for the longest contract when he signed 10-year deal in 1998.