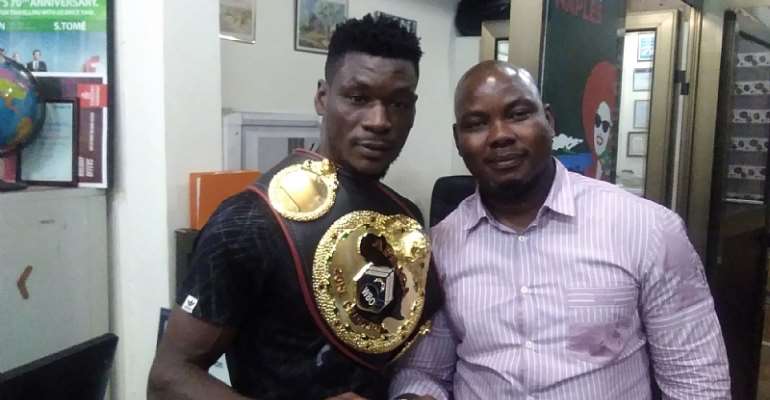 The D G Hathiramani Sports Hall of the Accra Sports Stadium will be the action spot on Saturday, August 10, 2019, as Ghana’s Patrick Allotey makes a defence of his WBO Africa junior middleweight title against Eric Kapia Mukadi from Congo DR.

With boxing taking over in recent times as the most organised sports, it has become very attractive and more sports fans are enjoying to see Ghanaian pugilists in action.

Saturday night is a Cabic Promotions night and boxing fans are going to be treated with mouth-watering bouts and some sweet performance as Patrick Allotey has promised to dish out a sterling show.

On the bill, another Ghanaian unsung hero, Ebenezer Tetteh takes on Kenyan Morris Okolla in a Commonwealth Heavyweight Elimination fight.

The winner of the Commonwealth eliminator fights Daniel Dubois aka The Dynamite on Friday 27, September 2019 at the Royal Albert Hall, Kensington, London, United Kingdom for the vacant Commonwealth (British Empire) Heavyweight Title.

Other boxers like rising star Emmanuel Quaye from the Cabic stable will also feature on the Cabic Fight Night 3.

Marketing Manager of Cabic Promotions, Jingles said they intentionally chose Accra Sports Stadium because it is a popular venue and ideal for the bouts.

He hinted that the official weigh-in plus press conference for the bout is scheduled for Friday 9th August 2019 at the plush Idrowhyt Event Center, Akoko Foto in Dansoman.

Kapia’s recent outing was against Russian Vaghinak Tamrazyan (16-5, 5KOs) on 30th March 2019 which he lost through a unanimous decision.

Patrick Allotey’s record stand at 40 wins, 3 draws and 30 KOs. He has defended his World Boxing Organisation Africa Super Welterweight title back to back with some incredible performance.

With his 43 career bouts and 220 rounds of boxing action, Allotey has the experience and confidence going into the bout on Saturday.

According to media speculations, the odds favour the Ghanaian with his complete package of skills, speed, power and work ethic come Saturday, August 10.