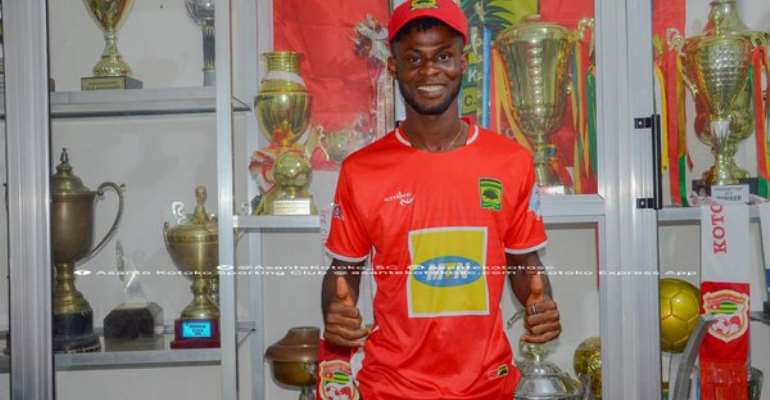 The Porcupine Warriors announced the signing of the offensive player on Friday, July 4, 2019, after unveiling two other players earlier in the day. Kevin Andoh penned his signature for the club after passing a routine medical examination conducted by the Dr. Twumasi Baah-led Medical Team on Thursday.

The Black Stars B player joins the likes of goalkeeper Kwame Baah and midfielder Justice Blay as the new additions of the Kotoko squad in the current transfer window.

Kelvin Andoh joins the Kumasi based club on a free transfer after severing ties with the Wa-based club following the expiration of his contract.

His signing is part of Kotoko’s efforts to boost their squad ahead of what will be a difficult 2019/2020 season. They will be competing in the Ghana Premier League which is expected to resume in August as well as the next edition of the CAF Champions League.

Kevin Andoh was part of the Wa All Stars’ squad that won the 2016 Premier League title and was also influential for the Black Stars B when Maxwell Konadu’s side won the 2017 WAFU tournament in Ghana.

Meanwhile, Kotoko is still in talks with some other players as they look to strengthen all departments of their team ahead of their pre-season training for the upcoming season.