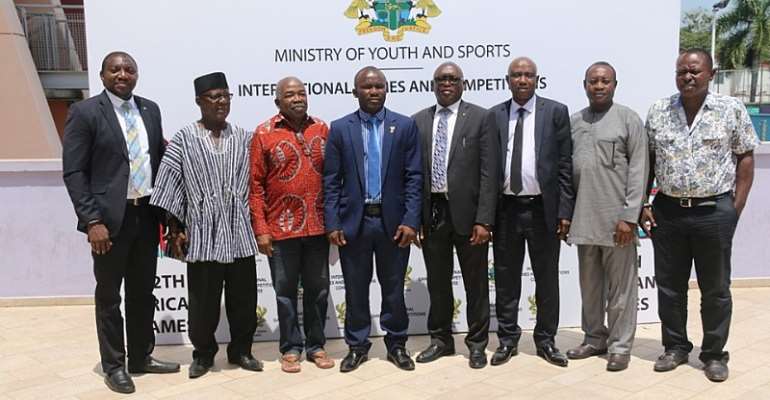 The Chef du Mission (CDM) for the 12th edition of the Africa Games in Rabat, Morocco, Reverend Richmond Quarcoo has disclosed to the Sports Media that Team Ghana would be ready to represent Ghana at the Games in August.

Addressing the press at the Accra Sports Stadium on Ghana’s preparations, the International Games & Competitions member said Ghana is ready to participate and the nation will send only athletes who have the potential of winning medals.

Rev. Quarcoo who is also deputy secretary general of the Ghana Olympic Committee (GOC) said the Games will start from August 16th to September 1, 2019, with the opening ceremony on August 19, 2019.

According to Quarcoo, Ghana wanted to send 18 disciplines, but it could be prone down according to the medal potentiality.

“All athletes who will be attending the Games are selected by their respective federations based on their own selection criteria. However, their final list is subject to the approval by the technical subcommittee of the International Games & Competitions Committee (IGCC)’ he expressed.

He hinted that the deadline for accreditation is 27th June and informed that all potential athletes and officials who will be attending the Games have been entered to enable the organizing committee to accredit them accordingly.

He said the full list of athletes and officials will be approved by the Ministry of Youth & Sports on the advice of the IGCC.

He urged all media who are interested in travelling to cover the Games to apply directly to the organizing committee also known as COJAR for their accreditation.

Rev. Quarcoo said there will be an orientation for all athletes and officials attending the Games and they will be made to sign a code of conduct to ensure that all participants will comport themselves well as good sports ambassadors of Ghana.

He announced that Team Ghana will depart to Morocco for the Games by 16th August, 2019 and the Games will come to a close on 1st September, 2019.

The International Games and Competition Committee (IGCC) is a committee formed by the Ministry of Youth and Sports (MOYS), to supervise the participation of Ghana at the 2019 Africa Games and other international competitions

The IGCC has established sub-committees to implement their plans for the continental showpiece.

Professor Peter Twumasi, the Director General of the National Sports Authority (NSA) who is chairman of the IGCC said, the sub-committees' work or decisions would be subjected to the IGCC's approval before they would be implemented.

He added that the athletes have started preparations for the 12th edition Africa Games, and they must do their best to bring home medals.

Mr Magnus Rex Danquah, chairman of the Marketing, Sponsorship and Media committee urged the media to partner the IGCC to work cordially to produce positive results.