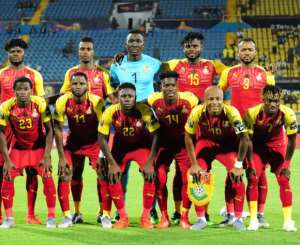 Ghana defender, Jonathan Mensah has reiterated that his side could have easily be beaten by the Squirrels of Benin on Tuesday night in the 2019 Africa Cup of Nations (Afcon) in Egypt.

Ghana were held by the Squirrels to a 2:2 at the Ismailia Stadium in their group opener.

Mickael Pote broke the deadlock in the 2nd minutes before Andre Ayew cancelled his lead in the 8th minutes.

Jordan Ayew who was leading the lines scored the second goal before half time.

However, Pote scored his second goal of the night in the 63rd minute to end the game 2:2.

But the Columbus Crew centre-back insists the team could have lost all three points.

"We could have lost the game so a point isn't bad for the team," Mensah told Goal after the game.

"It's good [to see the Ayew brothers enjoying a strong start to the tournament]. It's always good getting some goals in.

"We conceded two goals, we'll go back and work on the team.

"We got two goals but some of the decisions from the referee didn't go our way."

Four-time champions, Ghana who are making their 22nd appearance at the continental showpiece, next play Cup holders Cameroon on Saturday, June 29.

"It's a game, which we will go back to the drawing board and work on Cameroon now," Mensah said.

Cameroon and Ghana last met at Afcon 2017 in Gabon where the former ran out 2-0 victors in the semi-finals.