AFCON 2019: Obi Mikel: This Might Be My Last AFCON 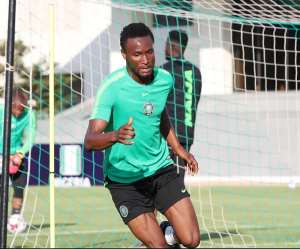 Nigeria captain John Obi Mikel has hinted that his sojourn with the Super Eagles might be coming to an end, saying the Total Africa Cup of Nations Egypt 2019 may be the last time he is seen at the biennial championship.

Interestingly, Mikel, formerly with Chelsea but now with Middlesbrough in the English second tier played his first ever Cup of Nations in Egypt, back in 2006

Thirteen years later, the 32-year-old says it will be a pleasant honour for him to make his final goodbyes in the same city his national team journey started from.

“It will not be a bad place for me to finish, yeah?” Mikel said at the team’s pre-match press conference ahead of their opening game against Burundi in Alexandria on Friday afternoon.

“I remember in 2006, I was young and it was my first year in the national team. It was my first tournament and it was a great one as well because we finished third. This place (Egypt) has always been good to me,” he added.

And now, if he will affirm the decision to retire from the national team after this AFCON, Mikel wants to go out on a high and probably go on and lead the team to the title.

“I am not 100 per cent sure this is my last one, but maybe. I always give my best to the national team when I come here and now that we are back after two editions, I just want to come in and do my best and see whether we can go one better and win, better than my first time,” Mikel said.

The midfielder has been out of the national team since their FIFA World Cup experience in Russia last year and only made the decision to return after being prevailed upon by head coach Gernot Rohr.

“My entire mind is here and anytime I accept to come to the national team, I know I am ready to give my all and I am in good shape. I don’t want to come here and disrespect the country and the players. I am here to give my all,” the midfielder said.

His aim now is to help the young side grow and play with confidence especially now that he is the defacto leader of the group.