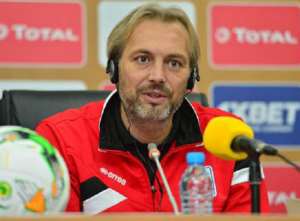 The 2019 Africa Cup of Nations officially kicks-off in Egypt on Friday with Uganda in action a day later against the Democratic Republic of Congo in Cairo.

Desabre’s troops are paired alongside the host nation while Zimbabwe round off what is a competitive Group A.

While Egypt are clear favourites to progress as group winners, the other three teams are all very closely matched. The Cranes, who lost to the Pharaohs in Gabon two years ago, will be desperate to improve on their showing at the 2017 tournament where they finished bottom of the group.

“The camp where we prepared for the African Cup of Nations was the first step for us as we spent two weeks in Abu Dhabi, and I am very happy to be here in Egypt and I hope to achieve the title,” Desabre told EN Sports.

“Egypt is a big team, but there are other big teams in the tournament and we can not ignore them. Our focus will be on Zimbabwe and Congo because all the games are tough.

“Winning two matches in the group stage means qualifying for the next round.”