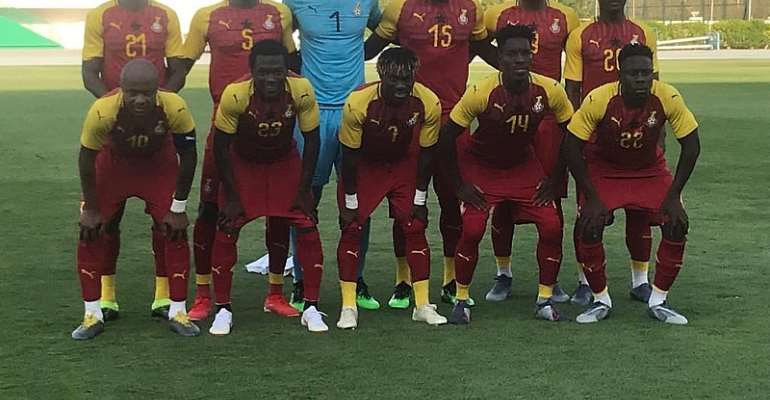 The Black Stars of Ghana were held to a goalless draw by South Africa in their final pre-AFCON friendly on Saturday at the Police Stadium in Dubai.

Ghana creating numerous chances, could not put the ball at the back of the net.

The Black Stars had a good start to the game dominating possession but it was the Bafana Bafana who nearly opened the scoring.

However, Maritzburg goalkeeper Richard Ofori was up to the task after making a good save from a South Africa effort.

Ghana could have been up by a goal after what looked like the ball crossed the line was disallowed due to the lack of a VAR.

Thomas Agyepong and Thomas Partey on several occasions threatened the defence of the South Africans with the Atletico Madrid star unleashing a belter which went inches wide.

Kwadwo Asamoah took absolute control of the game in midfield with some thrilling displays and combining well with captain Andre Ayew and lethal winger Thomas Agyepong.

Both teams spent three minutes for water breaks because of the heat at the Police Stadium in Dubai.

Coach Kwasi Appiah however, made two quick substitutions by bringing on Samuel Owusu and Kwabena Owusu for Thomas Agyepong and Christian Atsu respectively.

Samuel Owusu quickly settled into the game and came close to scoring his debut Ghana goal after hitting a ferocious shot from outside the box.

General captain Asamoah Gyan, Jonathan Mensah and John Boye were all brought on by coach Kwasi Appiah but the scoreline did not change.

Ghana will land in Egypt for the tournament which start on June 21 to July 19 on June 20.

The Black Stars are in Group F alongside Cameroon, Guinea Bissau and Benin.