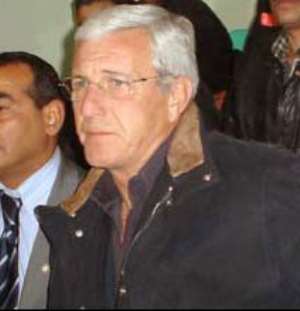 Italy coach Marcello Lippi insisted that Ghana's 1-0 defeat to Nigeria in the African Cup of Nations (ACN) Group A opener that took place on Monday didn't reflect the true performance they were capable of. “Chelsea star Michael Essien and Udinese's Sulley Muntari's absence through injury affected the team's performance in the match,” Lippi told Filgoal.com in Port Said. Black Stars coach Ratomir Dujkovic ruled out both Muntari and Essien in the 11th hour before their African Cup campaign kick-off. Ghana suffered a 1-0 loss to Nigeria, thanks to a Taye Taiwo striker in the 85th minute of the match. Lippi insisted that he will follow Ghana's coming match against Senegal on Friday before leaving for Italy on Saturday.