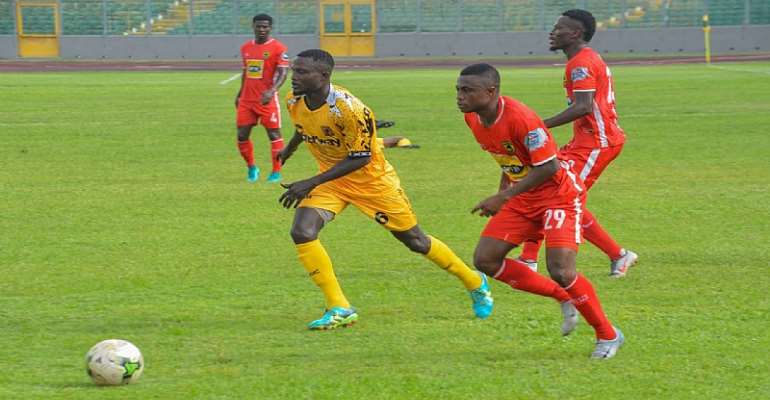 Kumasi Asante Kotoko’s dip in form was once again highlighted when the side locked horns with regional rivals Obuasi Ashanti Gold on Match Week 11 of the Normalization Committee Special Competition.

The Obuasi based side defeated the Kumasi club by a lone goal to nil courtesy a lovely strike from Mark Agyemang in the final minutes of the first half of the match after putting up a good overall performance.

CK Akonnor’s men failed to win their midweek fixture against Bechem United and despite putting up a good fight for all three points today, they fell short to their Regional rivals at the Obuasi Len Clay Stadium in what is the 100th match between the sides.

Per the results, Ashgold is gradually climbing the Premier A standings and are in contention to make it into the top 2. They will, however, have to maintain their winning form in the next 5 matches in order to ensure they end the first round of the NC Special Competition strongly.

Kotoko, on the other hand, remains 2nd on the standings but drifting apart from Medeama SC who occupies the top spot. 4 points separate the two teams at the top even though they remain strong candidates to qualify to the next phase of the competition.