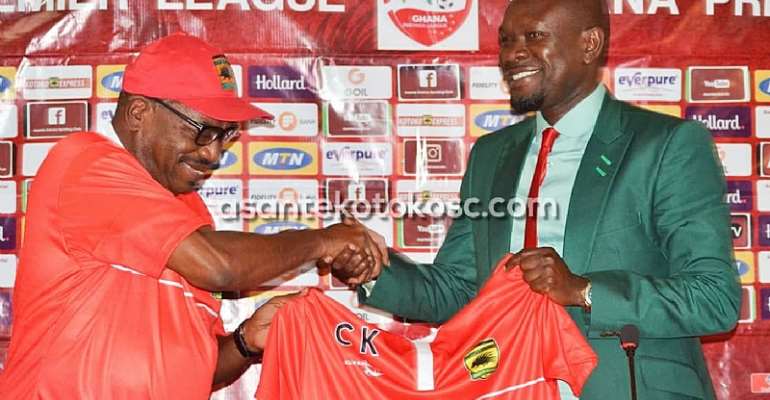 Management unveiled the former Wolfsburg and Black Stars captain as Kotoko’s new head coach on Wednesday, after tying down the former AshantiGold trainer to a three-year contract on Tuesday.

C. K. Akonnor replaces Paa Kwesi Fabin, who resigned from his post a few weeks ago, and the ARCC, which is one of Kotoko’s most vibrant supporters groups, has welcomed the appointment and believes he would succeed at the club.

“We are overwhelmingly elated that the management of Asante Kotoko SC, after the resignation of Paa Kwasi Fabin, has aptly appointed the best or one of the best technical brains on the local scene in the person of C.K. Akonnor to manage our club in the next three years,” says the group in a press statement signed by the Vice Chairman (Operations) of the group, Kofi Edusei.

“The regional council has no shudder of doubt or wheresoever about what he can bring on-board looking at the fabulous work he did with Dreams FC and Ashgold.”

“As a young coach who has gotten the opportunity to manage the technical affairs of the biggest club in the country and one of the biggest clubs in the continent, we hope that, he will display a high level of professionalism and hard work that can push his course and that of the club to greater heights.”

The group pledges its support to CK Akonnor and charges the Kotoko hierarchy to unite in support behind the new trainer.

“We would like to use this medium to promise him with our unflinching support to execute his targets so well.”

“We call on the rank and file of Asante Kotoko SC to eschew Functionalism, Parochial thinking, Pull Him Down Syndrome and others which impede the progress of Asante Kotoko SC while we pave the way for unity to bring all our arsenals together for the betterment of our great club.”