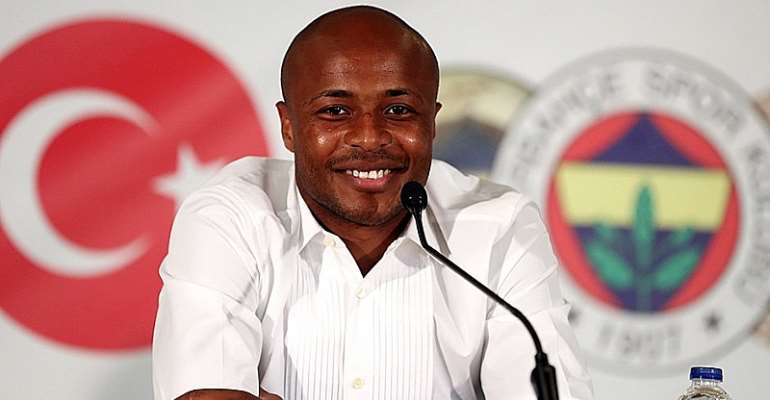 Andre, who led the country's U-20 side to lift the FIFA U-20 World Cup in Egypt made the headlines for the positive reason.

According to Tagoe, the leadership qualities of the former Swansea City forward is a genetic he inherited from his father.

"With Andre, he has been on top of his game for years now, we all know what he can do,' Tagoe told SVTV Africa.

"But Andre has something which is from birth, he has leadership qualities, trust me and forget about what people say that he is too know.

"When I was playing in Madina colts football, when he was young, his dad used to bring him to play and he's been like that.

He continued, "If you want to know the best team in Ghana, the youth team U-20 our time was the best.

"Even U-23 we have Asamoah Gyan, Anthony Annan and the rest but we couldn't reach anywhere.

"He came we went to Africa, he won.
"We went to the World Cup, he won and brought the cup to Ghana, so it is by birth."

"We have certain things you can't take it from anybody, it's from his father to him and I believe he still has that thing," the former Bursaspor forward told SVTV.

The former Tudu Mighty Jets and Hearts of Oak attacker revealed to SVTV how the presence of Abedi Pele has helped to shape the career of the new Fanebache player and at the right time, he would achieve heights Abedi Pele was unable to conquer.

"In life, we are all born in different ways, but when you are born and your father has certain things, he transfers it to you, we're your dad hasn't reached you can continue.

"Wherever Dede would play whether Turkey or wherever, he can go to Saudi Arabia when the time comes it will happen," Tagoe said.

Prince Tagoe played with Andre Ayew for the Black Stars on a number of occasions during the 2010 World Cup and AFCON.