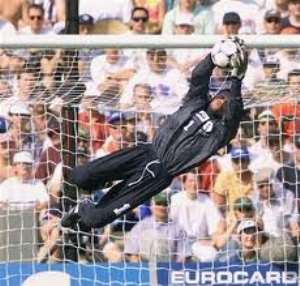 The final was part of a doubleheader at the Sheikh Zayed Stadium in Abu Dhabi, where Iran won the earlier third-place match in a penalty shootout against Kuwait (although Iran missed their first attempt Kuwait missed the last three of their five kicks to lose 1-1 (3-2).

The crowd of 60,000 stayed for the final and watched the two teams play to a scoreless draw before going into another shootout--the third consecutive one of the tournament, as Saudi Arabia beat Iran on penalties in the last semifinal.

The experience may have provided an edge, as Saudi Arabia--anchored by goalkeeper Mohamed Al-Deayea went on to win the shootout in the final, 2-4.

At the time, Saudi Arabia's three titles matched the record set by Iran in 1976. Since then, however, Japan has taken sole possession of the record with four championships between 1992 and 2011.