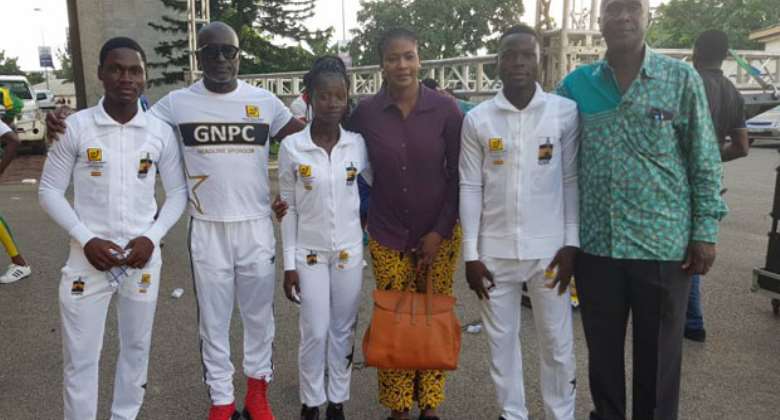 Brobby (2ndL) with the trio and some officials

Three athletes have been selected into the GNPC Speedsters Club in association with Adidas in an outdooring ceremony in Kumasi.

The trio emerged from 7,373 sprinters that started the 2017 journey in March this year, 250 made it to the final of finals in September

They include Mary Boakye, aka 'Jetter' based on her amazing fast start and running style. She is a past student of Kumasi Anglican SHS, where she excelled in the 100 and 200 meters.

Jetter came in second in the final of finals of the 2017 GNPC Ghana’s Fastest Human and she is poised to make a statement this coming Athletics season.

Also among the selected athletes is Samuel Asare, a final year student at Prempeh College in Kumasi. He is the current Sports Prefect and the first person to win back to back titles as Ghana’s Fastest Human U-18 two years in a row, 2016 & 2017.

He came in second to Asare at this year’s GNPC U-18 final of finals, even though he had beaten Asare earlier at the National Regional SHS championship.

They will be coached by Coach Anselm Nyavedzie aka, 'Mourinho' and would be camped at the Baba Yara Stadium.

Tutors are also at their disposal, while Dr Charles Kwabena Adu Poku will be their physician.

I won’t be an impediment to free, fair and transparent elect...
9 minutes ago