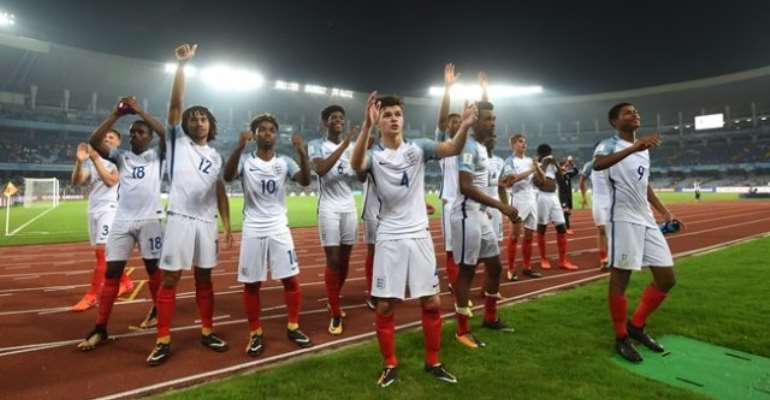 Three confederations (Africa, Europe and South America) were involved in the semi-finals of the FIFA U-17 World Cup India 2017, but only one confederation will be represented in the tournament's showpiece final on Saturday.

England and Spain edged out Brazil and Mali respectively, with each side inspired by their star strikers Rhian Brewster and Abel Ruiz, who continued their personal duel to win the Adidas Golden Boot award, as the tournament's top scorer.

The games
Brazil 1-3 England
Mali 1-3 Spain
What we learned
Comeback kings defeated.
Brazil had trailed three times to European sides at the tournament and three times managed to hit back. Against Spain and Germany, they turned 1-0 deficits into 2-1 victories, and they also levelled things up at 1-1 against England after falling behind early in Wednesday's semi-final. A Seleção could not keep the Three Lions out, however, and will now compete for a bronze medal in Saturday's match for third place.

A new world champion.
Regardless of who prevails in Saturday's final in Kolkata, one thing is certain: after Nigeria, Switzerland, Mexico, Brazil, France, Ghana, Saudi Arabia and the Soviet Union, the FIFA U-17 World Cup will have a new winner and its ninth in total. England's previous best performance at the tournament was reaching the quarter-finals, while Spain are three-time losing finalists (1991, 2003 and 2007).

Ruiz the talisman
England have Rhian Brewster, Spain have Abel Ruiz. The Spanish No9 is the captain and leading goalscorer for La Rojita, and he added another two goals to his haul against Mali. Only two months ago, the Barcelona forward told FIFA.com: "The night we won the European U-17 Championship, I was already dreaming to myself of lifting the World Cup. It really would be a massive dream [come true] because no Spanish team has ever managed to do it." The 17-year-old is now just one win away from that dream becoming reality.

The stat of the day
3 - In the history of the U-17 World Cup, only three players have scored two hat-tricks at a tournament: Marcel Witeczek (Germany, 1985), Florent Sinama Pongolle (France, 2001) and Souleymane Coulibaly (Côte d'Ivoire, 2011). England's star-in-the-making Brewster has now added his name to that list.

The quote
"I'm very disappointed, obviously we wanted to win. Both sides played their part in a great game, a very intense game, but we just didn't put the ball in the net. Our defence repelled a lot of shots and crosses, but unfortunately, you can't stop everything. In our previous games, our goalkeeper was able to make a save or the opposition didn't finish their chances. The difference today was that England stayed cool and took their chances ruthlessly."