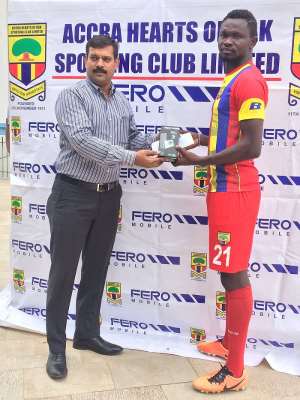 Defender Vincent Atinga has been named the Fero Mobile Hearts Player of the Month for May.

The towering centre-back impressed heavily in the month under review and has been presented with a mobile phone from their sponsors.

The Ghana FA has charged the Phobians with misconduct for ambush marketing over sponsorship deal with the mobile phone company.

The club insist it has done no wrong - leading to the decision to go ahead to make a public announcement despite the matter pending with the FA.

Hearts responded to their 5-0 humiliation at WAFA by destroying relegation-bound Bolga All Stars 4-0 in the capital last Friday.

COVID-19: 94 Persons Who Came Into Contact With UG Coronavir...
7 hours ago