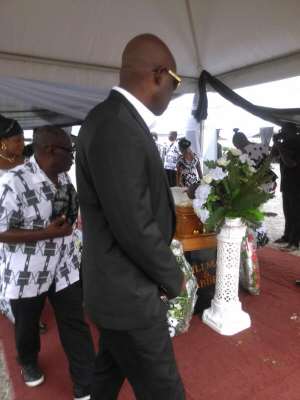 The Ghana Football Association and the entire nation bid the final farewell to one of the country's most experienced coaches, Sam Hermans Arday on Friday before he laid to rest at the Osu Cemetery.

GFA vice president George Afriyie led the tributes to the former national team coach at the forecourt of the State House on Friday.

With the President Kwesi Nyantakyi on officials duties abroad, Afriyie led the high powered delegation from the federation including administrators, staff of the GFA, coaches, footballers and other dignitaries.

He read a touching tribute that recounted how Sam Arday has been instrumental in the development of football in Ghana.

Arday passed away in the early hours of February 12 after battling a short illness.

COACHING EXPERIENCE:
Coach Arday was the coach of Ghana Olympic Team, which won the Olympic Bronze Soccer Medal at Barcelona '92, the first for an African country, and coach of Ghana national under-20 football team.

The Black Satellites won the Bronze Medal at 1991 Africa Youth Championship in Egypt after beating Zambia 200 in the 3rd and 4th Place Match.

He then became head coach of the Ghana national under-17 football team, the Black Starlets, who won the 1995 FIFA U-17 World Championship Trophy in Ecuador and the African Under-17 Championship in Mali.

Prior to his demise, he was with WAFA where he saw to the development of youth talents. Notable among them is Samuel Tetteh who represented Ghana at the African Cup of Nations.

Residents of Settlement unhappy over destruction of road in ...
36 minutes ago