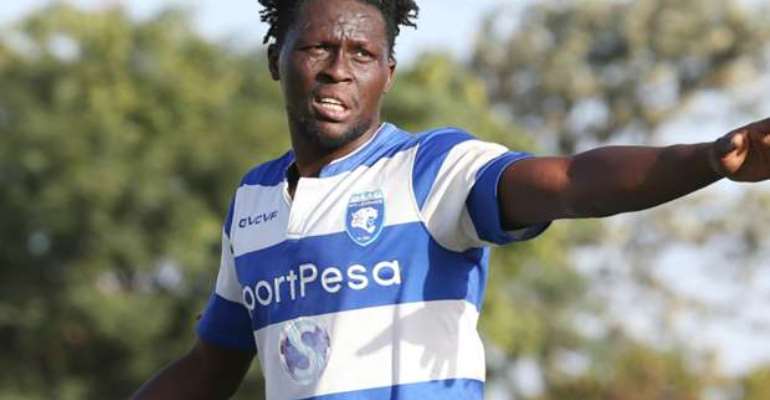 AFC Leopards coach Stewart Hall has heaped praises on Gabriel Fiamenyo and Marcellus Ingotse for their contribution in the side's 3-0 win over Nakumatt in the SportPesa Premier League.

A visibly impressed Hall could not help expressing public admiration for the team that crushed newcomers Nakumatt 3-0 in their SportPesa Premier League match on Sunday and for new signings Ghanaian striker Gilbert Fiamenyo and young sensation Marcellus Ingotse.

Hall said he was impressed with Fiamenyo's physical strength, his ability to hold on to the ball as well as his attack mindedness, while he was in awe of Ingotse's speed and technique.

Said Hall: 'Fiamenyo is great, especially when he has the ball. He has the ability of getting into good goal scoring positions. He is also quite intelligent, although he has one weakness. When we don't have the ball, he cannot run and that is why you have to have him partner with a speedy player such as Kiongera. Kiongera does his job when we don't have possession.

'I did not start Ingotse during the Nakumatt game, but that is only because he is a young player. I didn't want him to be part of all the pressure we were facing now that this was our first match. He is the quickest player in our team so I deliberately brought him in in the last 15 minutes, when the other players are tiring. With his speed, a goal was almost a guarantee.'

Ingotse and Fiamenyo both made their debuts for Ingwe on Sunday and scored a goal each.

Fiamenyo was signed from Accra Hearts of Oak in June last year, but was unable to play in the second half of the season as his paperwork could not be completed within the transfer window deadline.