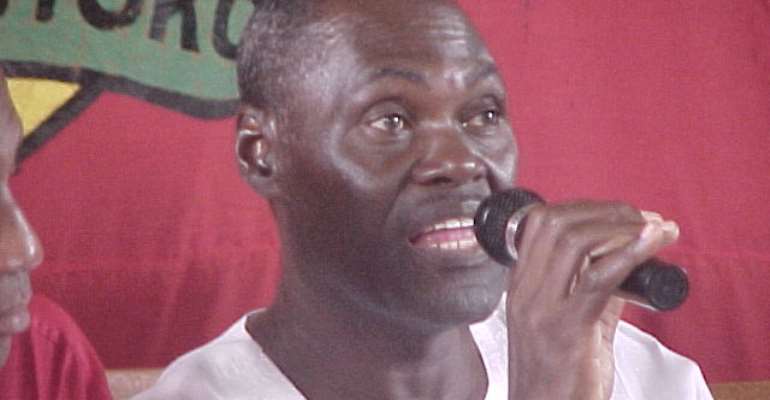 Kumasi Asante Kotoko's management is currently suffocating under a serious financial squeeze that has got Chief Executive Maj. Yaw Larson (rtd) scratching his scalp over how to finance the team and also deal with a mounting debt burden.

Maj. Larson confessed to the Graphic Sports in an interview that his “biggest headache” was how to deal with a ¢7.5 billion debt and also improve upon the club's cash flow to finance their recruitment drive and to ensure the effective running of the club.

The Porcupine Warriors, with a massive and loyal support base, may be perceived as a club of sound finances, but their 'Old Soldier' CEO maintains that that perception does not reflect the reality because financial woes are “very serious”.

“Getting money to run the club is my biggest headache, and the biggest problem in Kotoko today.

It's very serious, although people tend to think that money is no problem in Kotoko,” Maj. Larson said in an interview after the club's victory in the One-Touch Gala last Sunday.

For a club that has fanatical following, multi-billion sponsorship deals with Spacefon-Areeba and Stephen Asare Original Pay All Lotto, receipts from transfer of players like Isaac Boakye, Charles Taylor and Frank Osei, and also the presence of some deep pockets as Directors, Kotoko's finances should have not looked that precarious.

However, a poor run of results has kept many fans away from their matches and largely accounted for dwindling receipts from gate proceeds.

Kotoko's financial outcry has become a familiar tune sang by successive management teams in recent years. After four seasons in charge, former chief executive Mr Herbert Mensah claimed the club was indebted to him to the tune of ¢5 billion.

The club's finances were no healthier when his successor, Mr Sylvester Asare-Owusu's administration left office after one season when the Porcupine Warriors won the 2004 premier league. By the time the Asare-Owusu-led IMC exited, the club's account was in red with an estimated debt of ¢3.5 billion staring at them.

Nonetheless, Maj. Larson says he is ready to face the challenge of bringing a semblance of stability into Kotoko's finances despite their financial squeeze that is a big impediment in the club's recruitment exercise.

Meanwhile, a number of senior players of Kotoko risk being shown the exit as the club's management embarks on a determined move to trim the playing body to a more manageable size and also recruit new players to replace some misfits in the team.

Maj. Yaw Larson explained to the Graphic Sports that laying off some big name players was an urgent and inevitable exercise that must be pursued with a determined effort in order to restore the club to the top of Ghana football.

Already some big name stars like former skipper Joseph Hendricks, goalkeeper George Owu, and Michael Asante have been marked as “endangered species” likely to be given the chop as the technical staff assesses some new players the club has targeted.

Maj. Larson said that the performance levels of some old players has taken a dip as a result of “wear and tear” necessitating their replacement. And as a shrewd manager, the Kotoko CEO wants to maintain a sizeable playing staff that the club's finances can support.

“When I came into office we had about 56 players and I intend to trim the size down to about 28 or 30 which is a more manageable size that our finances can support,” Maj. Larson said.

Pressure from various quarters have compelled the Kotoko management to rethink their intended transfer exercise targeted at some recalcitrant top players, but the club's CEO is convinced a house-cleaning exercise is a necessary evil in order to achieve their set target.

“Discipline, determination and dedication are my cardinal principles and those who fall short of these principles ought to make way for others who are ready to play their heart out.

Chereponi: I’m humbled by this opportunity to serve — DCE no...
20 minutes ago

Ablakwa to file two urgent questions again over cost of Akuf...
29 minutes ago