AFCON 2017 Player Ratings: Ghana 0-1 Egypt - How the Players Players fared in the narrow slip to the Pharaohs 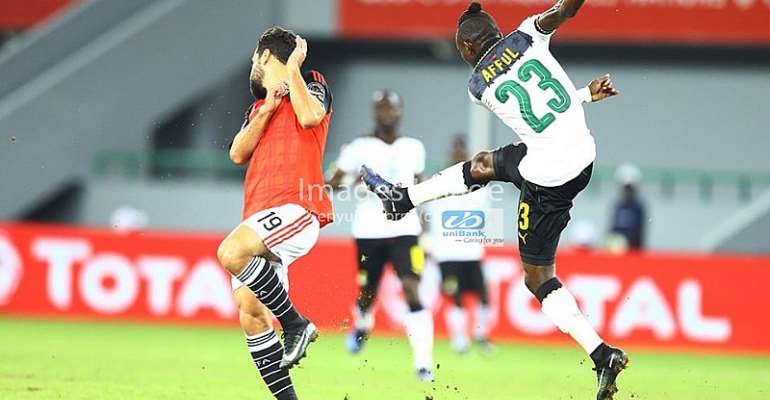 The Black Stars suffered a painful 1-0 loss after AS Roma star Mohamed Salah fired home a free-kick in the 11st minute at the Stade de Port-Gentil.

Goalkeeper Razak Brimah was Ghana's worst performer as his organizational abilities and failure to construct a formidable wall led to the goal.

GHANAsoccernet.com runs the rule over the performance of the Black Stars players as they displayed a strong second-half performance.

Razak Brimah GOALKEEPER 4/10
The Cordoba guardsman still remains unconvincing and gave gifted a pass to the Egyptians which nearly costed Ghana. Technically to be blamed for his bad positioning as he was left with no chance to stop the ball from flying in. Responsible for bad organisation of the Ghanaian wall as the Pharaohs took advantage to score the opener through Mohamed Salah.

Andy Kyere Yiadiom RIGHT-BACK 5.5/10
On his maiden competitive debut the Barnsley man enjoyed considerable success against a pacey Egyptian flanks-man TrÃ©zÃ©guet. He was entertaining and forceful when he surged forward and won a vital free-kick at an advantageous position.

Harrison Afful LEFT-BACK 6/10
Blocked Egyptian goal-bound effort and made a number crucial interceptions in a game which witnessed a lot of pace and muscle flair from the record-winners. He worked well on the laterals after switching to left-back.

Jonathan Mensah CENTER-BACK 5/10
Guilty of poor organisation and failing to stump his authority against Mohamed Salah and Co. The Columbus Crew man enjoyed few moments of success in the game.

John Boye CENTER-BACK 5/10
Committed the foul that led to Mohamed Salah scoring the opener for Egypt. The Sivasspor defender was playing his first but didn't look too convincing. Struggled to hold down TrÃ©zÃ©guet anytime he came one-on-one with the Royal Mouscron man.

Daniel Amartey MIDFIELDER 6.5/10
The Leicester City man displayed his bravado in marshaling the lines between the defence and the attacking line. He transformed his performance at Leicester City to Gabon as he excelled in his favourite club role.

Fire two deadly strikes at goal and really came into the game when he switched to his traditional number 8 role in midfield. The made crucial inceptions and distributed passes well. He added force and anchor to the Ghana midfield in the second-half as Amartey proofed a needed shield for the back-four. His place was taken by Wakaso Mubarak in the 80th minute.

Samuel Tetteh RIGHT-WING 5/10
The 20-year-old debuted in the competition and showed flashes of his brilliance on the wings. He was fearless and made a couple of attempts at goal. Replaced by Schalke 04 starlet Bernard Tekpetey in 72nd.

Christian Atsu LEFT-WING 6/10
Another quality performance from the Chelsea loanee. The 25-year-old was the only Ghanaian player who boldly took the game to his Egyptian. Picked the pockets of the Egyptian defence at will and ensured they struggled to cope with his constant raids and humiliating skills.

Andre Ayew ATTACKER 5/10
The West Ham United did little to impose himself on the game. He was virtually non-existent in attacking roles as he dropped into the middle and added leadership responsibilities with Ryan's absence.

Asamoah Gyan FORWARD 5/10
Feared to have suffered a hamstring injury after walking off the field of play in the 39th minute. Before his injury, the Ghana captain had threatened the Egyptians defence. He was replaced by Jordan Ayew.