Memorable send off for Sir Jones 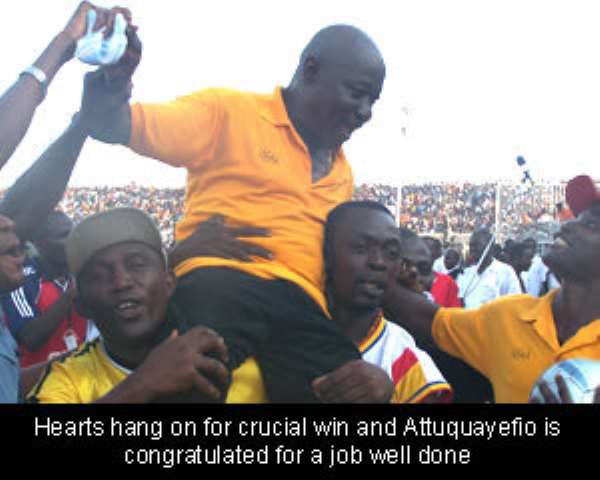 Accra, April 3, GNA - Veteran coach, Sir Cecil Jones Attuquayefio departed from the technical bench of Accra Hearts of Oak on Sunday, on a memorable note, when he guided the team to another historic win over their arch rivals, Kumasi Asante Kotoko in the 2004 league decider at the Ohene Djan Sports Stadium in Accra. Coach Attuquayefio, who is considered as the most successful technical brain of the Club, having won two continental honours in the 2000 CAF Champions League and the 2004 Confederation Cup competition as well as three successive league titles from 1998 to 2001, crowned his second successful stint with another silver ware. The coach, whose contract with Hearts ended last Thursday, March 31 and was on his way back to Liberty Professionals was implored by the Management of the Club to stay on for the crucial league decider and he executed the task to perfection with a lone goal victory over the "Porcupine Warriors". The defeat is the second to be suffered by Kotoko at the hands of Hearts in the 2005 soccer season. This was after the coach had masterminded an earlier victory over Hearts in the finals of the 2004 Confederation Cup competition at the Kumasi Sports Stadium early this year. It was striker Prince Tagoe, who executed the task on the field of play in the last quarter of the game when he glanced home Bernard Don Bortey's free kick with his head in the 76th minute of the game to beat keeper Eric Nii Baah, who is making his debut for Kotoko. The goal came after the two sides had sold some level of entertaining game to the partisan crowd at the stadium, which was dominated by the rainbow colours as they sang and cheered their boys on throughout the game. Hearts could have increased the tally after the goal, but Don Bortey's cross, was again swung across the goal post with no one to do the connection in the 80th minute. On the whole, none of the sides really took total dominance of the game as the battle for survival swung from one end of the field to the other minute by minute. Each of the sides however, were able to create series of chances but their attackers failed to convert them. Kotoko's Michael Osei was to have opened the scores in the 12th minute of the game, but he fumbled with the ball and allowed the Hearts defence to make a decent clearance, whilst another attempt from Elvis Opoku missed the target narrowly in the 19th minute. Kotoko's set-up was dealt a big blow when they lost their inspirational midfielder, Yussif Chibsah in 20th minute through injury and he was replaced with Kweku Essien. Hearts responded to the threat in their area with a swift build up in the 22nd minute but young Nii Baah saved Tagoe's tap from a cross delivered by Don Bortey. After this threat, Kotoko took temporal dominance of the game as Hearts also made some occasional incursions into the area of Kotoko but the game remained barren till the close of the first half. The pattern of the game remained the same in the second half with Kotoko having greater parts of the exchanges but it was Hearts who were more purposeful with their swift build ups, anytime they won the ball. Their attack almost always resulted in a turmoil in the defensive set up of Kotoko and Tagoe again saw his powerful header blocked by Issah Ahmed.
Kotoko responded with a quick counter attack and Edmund Owusu Ansah who had only keeper Eben Dida Armah to beat, saw his feeble shot saved by the keeper. Tagoe was again presented with the best goal scoring opportunity in the 72nd minute when he latched on a loose ball outside the penalty box and delivered a thunderbolt shot, but Nii Baah gave an equal response with a perfect save. The tall lanky Tagoe, however made amends four minutes later from Don Bortey's free kick. This was after substitute Francis Bossman was brought down at the edge of the vital area. Kotoko made some attempts at redeeming their image after the goal but they failed to do so despite the reduction of the Hearts team when substitute Dan Oppong was sent off by Togolese referee, Kokou Djaoupe in the dying minutes for a second bookable offence and not long after he whistled for the end of the match after two minutes of added time. The end of the match was met with a thunderous jubilation from the vociferous fans of Hearts. Mr Yaw Osafo-Marfo, Minister of Education and Sports presented the trophy to Hearts skipper, Lawrence Adjah-Tetteh to crown a good afternoon. LINE UP HEARTS: Eben Dida Armah, Micheal Donkor/Dan Oppong, Hassan Mohammed, Kwabena Boafo, Dan Coleman, James Boateng/Francis Bossman, Bernard Don Bortey, Adjah Tetteh, Eric Nyarko/Adnan Ali, Prince Tagoe, Alfred Nii Larbi. KOTOKO: Eric Nii Baah, Micheal Ofosu Appiah, Godfred Yeboah, Michael Asante, William Thompson, Yusif Chibsah/Kweku Essien, Micheal Osei, Edmund Owusu Ansah/Kojo Poku, Elvis Opoku/George Yamoah and Issa Ahmed

Sunyani: Sex workers beat man to death for refusing to pay a...
19 minutes ago

W/R: Woman in final month of pregnancy go missing at Takorad...
22 minutes ago