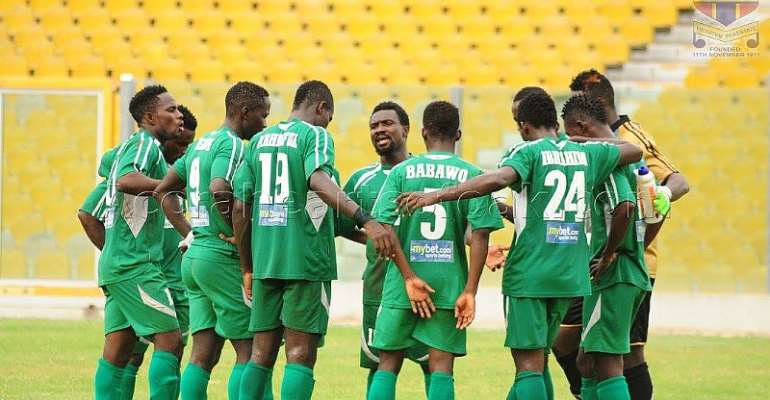 Sekondi Hasaacas will take on West African Football Academy in their fight for survival at the end of the season.

Their quest for safety will take a nose dive if they fail to beat the Academy boys at the Essipong sports stadium on Sunday .

They are lying second from bottom with just two points between them and survival.

Centre back Kingsley Adjei has failed to recover from an injury he picked against Medeama SC last Wednesday.

He has been ruled out of Sunday's crunchy fixture.
Samuel Afful is suspended for this weekend's match with accumulated cautions.

He missed a last minute penalty to deny Sekondi Hasaacas their first away victory this season against Medeama SC.

West African Football Academy are poised to put a dent on the survival hopes of the Hasmal with their first away win in the premier league this season on Sunday .

They could move up on the log into the top four zone with a win over the struggling Westerners.

Winger and captain Martin Antwi is expected back on the field against Sekondi Hasaacas on Sunday after missing the last two league fixtures via suspension and injury.

He has been suffering from a recurring knee injury since the start of the season.

(W3 D5 L6)
*WAFA SC have lost only one of their last seven premier league fixtures.

(W8 D3 L2)
*WAFA SC are winless in their last eighteen away matches in the premiership.

(W0 D5 L13)
*Sekondi Hasaacas are unbeaten at home to WAFA SC in the premier league after four meetings.

(W3 D1 L0)
*WAFA SC have lost just one of their last four encounters with Sekondi Hasaacas in the premier league.

(W2 D1 L1)
*The Western giants have kept just two clean sheets at home in the premiership this season after thirteen games.

*WAFA SC have managed to keep only two clean sheets in their thirteen away fixtures in the premier league this term.