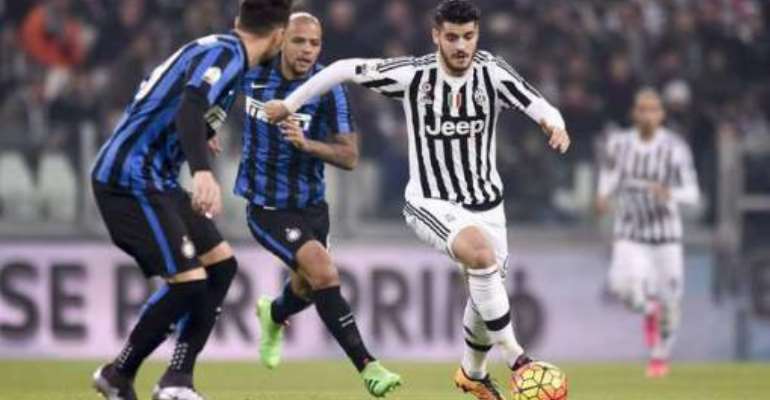 Ghana midfielder Kwadwo Asamoah was in full-time action as Juventus secured one foot in the final of the Coppa Italia, defeating arch-rivals Inter 3-0 at the Juventus Stadium on Wednesday night.

The fit-gain Black Stars player was instrumental for the Old Lady who must avoid this huge margin in the second-leg to seal their place in the final.

Without a goal in nearly fourth months, Alvaro Morata converted a 35th minute penalty before doubling his tally in the 62nd. Dybala made it three six minutes from time, awarding the Bianconeri a considerable advantage heading into the second leg.

The first chance of the contest fell to the home side just two minutes in when Paul Pogba played Kwadwo Asamoah through but the Ghanaian's off-balance effort finished high and wide.

Inter responded with long-range efforts from Gary Medel and Felipe Melo that were comfortable for goalkeeper Neto.

Controversy struck after 14 minutes when Juan Cuadrado's goal-bound free kick appeared to have struck the arm of Medel but referee Paolo Tagliavento signaled for only a corner despite a clear view of the incident.

In the 21st minute a Cuadrado grass-cutter drifted just wide of the far post with goalkeeper Samir Handanovic rooted to the ground.

Juventus were awarded a penalty in the 35th minute when Murillo was judged to have taken Cuadrado down in the box. Morata stepped up and smashed his spot-kick into the top corner of the net to give Juventus the lead.

On the stroke of halftime Cuadrado's free kick found Morata but the Spaniard's header was straight at Handanovic.

Juve doubled their advantage in the 63rd minute, again through Morata. Melo deflected an Asamoah cross straight to the former Real Madrid man who turned and fired in at the far post.

Inter were reduced to ten men after 70 minutes when Murillo was sent off for a second bookable tackle on Cuadrado.

In the 78th minute Pogba played an impeccable ball across the Inter box but Morata denied himself the hat trick by ballooning over from eight yards.

Dybala put the tie to bed with a first-time effort that went straight through the legs of Handanovic, sending the Juventus Stadium into a state of euphoria.

The tie's second leg will commence on the afternoon of March 3rd.