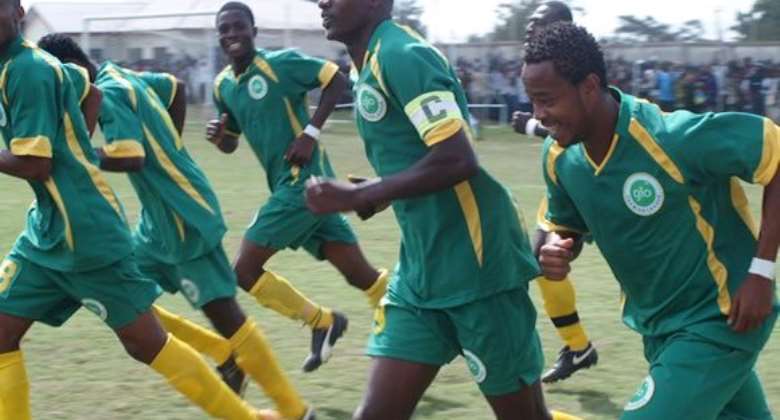 Aduana Stars have advanced to the quarter finals stage of the 2015 MTN FA Cup competition after the GFA Disciplinary Committee declared them winners of their round of 16 match against Istanbul.

In their round of 16 match played at the Agyeman Badu Park in Dormaa played on May 24, the game ended abruptly after a player of of Istanbul FC(Amenyo Salifu) allegedly attacked the referee.

The two clubs, Istanbul FC and Aduana Stars FC however protested against each other in relation to the same match and the same facts.

PROCEEDINGS
In accordance with Article 41.5 of the GFA Statutes and Articles 37(10)(a) to 37(10)(d) of the Ghana Football Association (GFA) General Regulations, the Disciplinary Committee (the Committee) did not require the presence of the parties but considered all the statements by the parties:

SUMMARY OF THE FACTS
CASE OF ISTANBUL FC
Istanbul FC (the Petitioner) protested against Aduana Stars FC (the Respondent) and the match officials (even though the Petitioner did not name the match officials as parties to the Protest) for causing the abrupt end of their MTN FA Cup Round of 16 match in contravention of Articles 24(1) of the General Regulations of the GFA.

It was the case of the Petitioner that the home fans invaded the field of play in the attempt to attack the player and it took the Red Cross and the security over twenty minute to bring the situation under control.

The Petitioner contended further that even if the match referee could not continue with the match, the fourth referee in accordance with Article 19(8) could have continued with the match.

The Petitioner consequently pleaded for a replay of the match on a neutral venue with adequate and effective security 'because the match failed to travel the full ninety minutes due to multiple acts of Amenyo Salifu, the assistant referees and the home supporters' which caused the abrupt end of the match.

DEFENCE OF ADUANA STARS FC
In its Statement of Defence, Aduana Stars FC contended that the Protest against them was without merit and ought to be dismissed and three goals awarded in its favour because of the following reasons:

i. That Aduana Stars played no part in bringing the match to an abrupt end but that it was rather the Petitioner's player who slapped the referee which led to the abrupt end of the match contrary to Articles 34(1)(b) and 34(12) of the GFA General Regulations.

ii. That Article 24(1) referred by the Petitioner does not apply to this match and quoted Articles 34(1)(b) of the General Regulations.

iii. That in their view, the technical bench and player Amenyo Salifu rendered the match impossible to continue knowing very well that Aduana Stars FC was leading at the time by a goal to nil against Istanbul FC.

iv. That three (3) goals should be awarded to Aduana Stars FC, the player should be seriously sanctioned to serve as a deterrent to others and finally Aduana Stars FC should be compensated for the cost incurred.

FINDINGS AND GROUNDS OF THE DECISION
The Committee finds that the match was progressing until a player of Istanbul FC by name (on the team sheet) Henry A. Salifu attacked the match referee which triggered a number of actions and inaction which lead to the abrupt end of the match around the 70th minute when Aduana Stars FC were leading by a goal to nil against Istanbul FC.

For Istanbul FC, Article 24(1) and 18(8) of the General Regulations provide as follows:

Article 24(1) 'Each match shall last 90 minutes, two (2) periods of 45 minutes each with an interval of not more than 15 minutes. The Referee shall allow for time wasted or lost through accident or other sufficient cause'.

Article 19(8) 'A qualified Referee, other than the officiating Referee and Assistants, shall be appointed in each match as fourth referee.

His duties shall be:-
To take the place of the officiating referee or any of the assistant referees who either through absence, indisposition or other cause, may retire in the course of the game'.

According to Aduana Stars FC, Istanbul FC should be made to suffer forfeiture under Article 34(1)(b) of the General Regulations of the GFA. The said article reads:

Article 34(1)(b) 'A team commits an offence punishable by forfeiture of a match where that team positions itself in such a way as to render the progress of the game impossible or the player(s) or supporter(s) of the team initiates an act responsible for the abrupt end of the match'.

It is clear from the regulations quoted by Istanbul FC that the club seems to be blaming the fourth referee for failing to take charge of the match when the match referee could not to continue with the match.

In the situation where a violent act had caused the disposition of the referee and had triggered other acts from other officials leading to bad relationships with the two assistant referees and a club, it was clear the match required more than just a change of a centre referee. Indeed the two assistant referees would have equally required replacement in the instant case. In this situation, the limitation of Article 19(8) of the General Regulations is indeed clear for all to see.

This is not the purpose for which the provision was envisaged and therefore the Protest of Istanbul FC shall fail. For if this was the purpose of the provision, abusing it through attacks on the centre referee to warrant his replacement with the fourth referee will become the order of the day.

It is the finding of this Committee (as was also admitted by Istanbul FC in its Protest and Cross-Statement of Defence) that the act of Henry A. Salifu (as the initiator of a chain of events), clearly lead to the abrupt end of the match. Istanbul FC was caught in the web of Article 34(1)(b) of the General Regulations by its own admission that Amenyo Salifu initiated events by his punch even though the club sought to blame others too for their contribution to the mishap. The second part of the regulation (highlighted) does not concern itself with what others contribute to the problem. It simply punishes the club to which the player or the supporter who initiates the act belongs to as highlighted below.

'A team commits an offence punishable by forfeiture of a match where that team positions itself in such a way as to render the progress of the game impossible or the player(s) or supporter(s) of the team initiates an act responsible for the abrupt end of the match'.

It is therefore our holding that the Protest of Aduana Stars FC shall succeed.

The final question whether it was necessary for Aduana Stars FC to file its own protest in this matter is answered by Article 34(7) of the General Regulations (as amended). It is the responsibility of a club to be vigilant within the stipulated time to request for the points or win by proving its case under Article 34(1) and the GFA could not have granted the points or win to Aduana Stars FC suo muto.

Article 34(7) 'For the avoidance of doubt, a team shall forfeit a match under this Article 34(1) in consequence of a protest duly filed within the time limited for filing of protests under these regulations'.

Finally, the Committee also averted its minds to Article 39(8)(a) of the First Amendment of the General Regulations of the GFA on fines which provides as follows:

We will recline the invitation to punish the player (subject matter of a charge by the GFA Prosecutor) and will reserve our comments on this occasion as this is not a misconduct hearing.

1. That for its player, Henry A. Salifu initiating an act responsible for causing the abrupt end of the match, Istanbul FC shall forfeit the match in accordance with Article 34(1)(b) of the General Regulations of the GFA.

4. That the amounts of money mentioned in Decision 3 above, shall be paid to the GFA within fourteen (14) days upon receipt of this Ruling, failing which Istanbul FC shall automatically forfeit all subsequent matches after the said deadline by the Division One League Board or the GFA in accordance with Articles 39(8)(b), 39(8)(d) and 39(8)(f) of the First Amendment to the GFA General Regulations.

5. That any party which is dissatisfied with this Decision has within two (2) days of being notified of this Decision to appeal to the Appeals Committee (see Article 31(b) of the FA Cup Regulations).