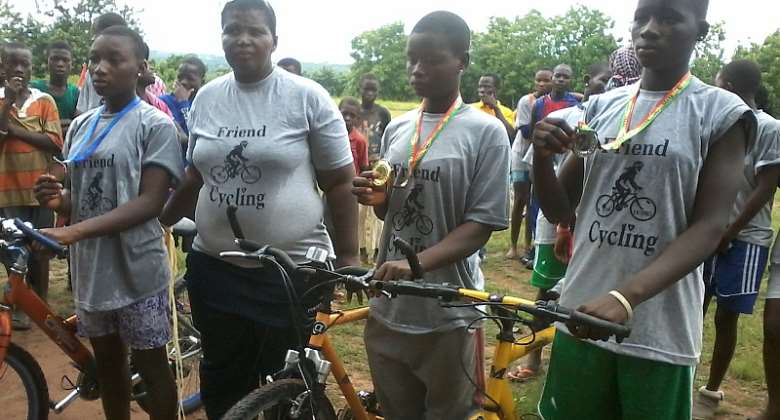 As part of activities to mark her 25th Anniversary celebrations on bike, Vida Juliet Vivie has organized a workshop for young female cyclists at Apeguso in the Eastern region.

The event which was themed “Building Female Capacity in Cycling” was to highlight the importance and benefits of cycling among females and to also erase the perception of infertility among young female cyclists. In her lecture, Madam Juliet Vivie reiterated that the purpose of the workshop was to provide golden opportunities for female cyclist to understand the sports and to transform and guide them to become professional cyclist.

“Cycling as perceived does not lead to infertility. Cycling offers lot of benefit to individuals such as personal mobility, environmental and financial reward, as well as health and social benefits. I am passionate about the need to encourage and support females in achieving equal status and opportunity in the fields of cycling. I believe that effective promotion and participation of females in cycling will play a major role in building the capacity and self confidence in the young female cyclist to transform them from novice to experts’’ she said.

Madam Vida also tasked the government, benevolent organizations and individual to turn their attention to the development of female cycling because the perception about the sport has derail women from entering the sports.

She also educated the participants on Riding skills, Safety riding, Basic names of bicycle parts and its functions, Basic repair and Maintenance of bicycle as well as Grass track cycling race.

ABOUT VIDA JULIET VIVIE
Vida Juliet Vivie is a Ghanaian from Peki Avetile in the Volta Region. She was born on the 10th of January, 1969 to Mr. John Green Vivie and Madam Mary Adzoa Kom Vivie both natives of Peki Avetile. She had a formal education both basic and secondary at Peki.

Though her childhood dream was to become an Engineer, she has no regret that she is a qualified bicycle mechanic. She is the first female to own and manage a Bicycle shop in Peki, where she repaired and sold bicycle parts in 1989.

The profession has granted her a lot of opportunities and workshops to obtain additional knowledge for women in the male dominated profession. She is took part in the Women Non-traditional Trade at ATTC, which was organized by GES Technical Division at Accra in 2001.

Juliet love sports and she is inspired by her dream and the spirit of volunteerism. It is these qualities that inspired her to carry out a project aimed at assisting others to enjoy quality life.

Her medium of promoting quality life is through the formation and management of “Youth Sport and cycling Development club”. In the Eastern region.

Her Achievement in the Field of Cycling: