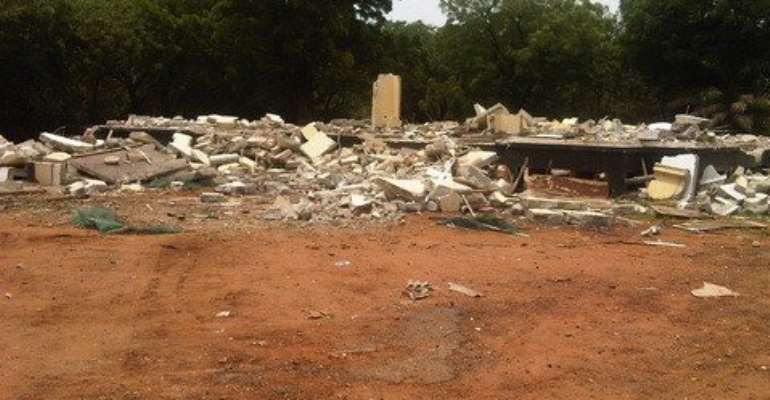 Feuding factions in Alavanyo and Nkonya; Peki and Tsito all in the Volta Region risk losing their lands to the state if they are unable to resolve their land disputes.

The take-over by the state seems imminent. That hint was given by NII Osah Mills, Minister of Lands and Natural Resources and Alhaji Bakari Sadique Nyawi, National Chairman of the Lands Commission, at a stakeholders’ forum in Ho on Monday to find a permanent solution to the two disputed lands.

That option received popular endorsement among 14 identifiable groups represented at the forum, except the National Democratic Congress, which had reservations arising from the likely fall-out to their election fortunes in 2016.

Other political parties also sounded equivocal in their positions on the State’s take on the option.

The forum initiated by the Lands Commission, sought to put forward proposals to government to resolve those disputes once and for all.

Should the take-over option be upheld, a team of lawyers would be constituted to look into the issue and advice government, said Nii Osah Mills.

The two protracted land disputes characterized by blood-letting, dating back to the 1920s, persisted, despite Supreme Court judgments and peace initiatives.

“…Historically, a lot of examples abound in Ghana where the State has intervened to take over lands that were the source of conflict between neighbouring communities”, Nii Osah Mills stated in his keynote address read by Barbara Serwa Asamoah, deputy Lands and Natural Resources Minister.

Those examples are the Nkawkaw, Winneba and Gomoa lands, which were vested in the state to end the conflicts between the Obomeng and Atibie stools and the Winneba and Gomoa stools respectively, Nii Osah Mills stated.

“One could also mention the state control of lands in Brong Ahafo, Western Region and Part One Lands in Kumasi, which had succeeded in warding off and stemming conflicts over the years.”

Nii Osah Mills argued that Article 37 (one) of the Directive Principles of State Policy in the 1992 Constitution placed a responsibility on the state, to among others, “take necessary and preemptive measures to intervene in any dispute that has the potential to degenerate into conflict that threatens the peace, security and stability of the nation.”

Alhaji Nwayi said two critical objectives must be achieved at the forum; to send a signal to our brothers and sisters in Alavanyo, Nkonya, Peki and Tsito, that we stand in solidarity with them in the search for peace, to ensure the productive use of lands.

That “the challenges they face affect the whole of the country and therefore they are no longer local events which need to be handled by themselves alone.”

Ms Helen Adjoa Ntoso, Volta Regional Minister said “we cannot afford to procrastinate any longer. We are the ones who should make peace happen in every thought and action…” and be guided by Susan Collins Mark that “the only way we can make peace is for each of us to be the peace we want to see.”

Identifiable groups represented at the forum were the Political Parties, Volta Regional House of Chiefs, faith based organizations, the Police, Military Command, Volta Parliamentary Caucus and the National Peace Council.