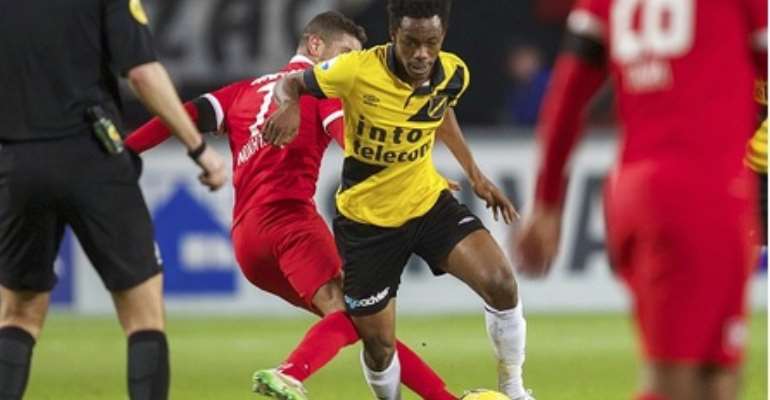 Divine Naah has taken his shocking snub from the Ghana U20 provisional squad for the World Cup in his stride – choosing to rather focus on his development at NAC Breda.

The 18-year-old's name is inexplicably missing from the 35-man squad submitted to FIFA as Ghana's provisional squad for the upcoming tournament to be staged in New Zealand.

Naah is one of the current best players in his age category playing regular top flight football in the Dutch Eredivisie.

He was a member of the Black Satellites team during the qualifiers for the African Youth Championships before joining English side Manchester City on 2014.

Naah was not called up for the African Cup probably due to his club engagements at NAC Breda.

He had however expressed his eagerness to be with the team for the World Cup in New Zealand.

Coach Sellas Tetteh however overlooked the midfield gem in his provisional squad that includes 13 foreign-based players.

Naah however choses to rather focus on improving his form at NAC Breda than dwell on his exclusion from the Ghana U20 World Cup squad.

“Yes (being disappointed) but like I said before, I would have been honoured if I was called to join the team,” he told GHANAsoccernet.com.

“But then it didn't happen. This is football so we move on.

“Now I have to concentrate on my development here [at NAC Breda] and hope for the best in the future.”

Naah is on his second successive loan stint at NAC.

He played for Norwegian club Stromsgodset in another loan move since joining Man City last year.