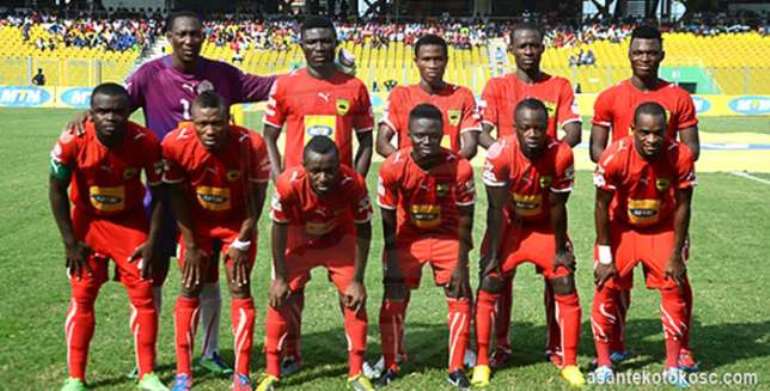 The hands of Coach David Duncan were once again seen on the Asante Kotoko team as they walloped Bechem United by three goals to one at the Bechem Park on Sunday in the First Capital Plus Premier League to bring the league champions back to winning ways.

Kotoko had a good start to the game when Michael Akuffo scored in 30 seconds of play to record the fastest goal in the ongoing Ghana Premier League.

Bechem United responded quickly with the equalizer from their Marksman, Noah Martey through a penalty kick in the 3 minute to restore parity in the game.

Inform Ahmed restored Kotoko's lead in the 24 minute to take his league goal tally for the season to four.

The Porcupine Warriors continued their dominance in the game, after the first half break and it paid off in the 56 minute when Michael Akuffo's freekick beat Ernest Adu in post to make the score line 3-1 in favour of the league champions.

The two goal hero for Kotoko, Akuffo had his best game in the 2014-15 league and Isaac Amoako proved why he was chosen ahead of Ofori Antwi and Joseph Addo to guard the Kotoko post as he made some good saves to deny the home team the equalizer.

The last time Kotoko managed a win was match day 4 against Inter Allies and have gone 6 league games without any victory and 8 in all competitions.

However, David Duncan who took charge of the team about a week ago, masterminded their victory at a ground they lost 0-1 last season and this famous win has now ended the winless streak of the champions.

The last time Bechem United lost a league game at home was match day 5 of the 2013-14 season and it was the same Coach David Duncan then with Hearts of Oak, who handed them that defeat.