EXCLUSIVE: Kotoko have SIX WEEKS to fight Ugandan player Ochaya at FIFA to return to Ghana 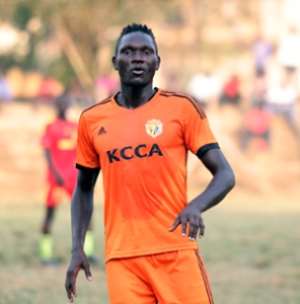 Ghanaian giants Asante Kotoko can still regain full ownership of Ugandan defender Joseph Ochaya within the next six weeks if they can prove to FIFA they did not violate the terms of his contract, GHANAsoccernet.com can exclusively reveal.

The Porcupine Warriors must provide the full documents and their defence to FIFA's Dispute Resolution Chamber to stand a chance to asking the player to return to the club.

Ochaya unceremoniously left Asante Kotoko last year alleging the club of blocking his move to German and has since been inactive till FIFA intervened by clearing him to join a club of his choice last week.

Ochaya was handed a provisional license by FIFA after the defender filed a complaint at the world governing body that Kotoko have not lived up to the dictates of the contract between the two parties.

Kotoko failed to put up its defence at FIFA when they were contacted over the Ocyaha complaint which resulted in FIFA's single judge Geoff Thompson's decision to give him a provisional license.

This means Kotoko have about six weeks to respond to the ruling by FIFA who could reverse their decision and order Ochaya to return to the Ghanaian club.

Kotoko will have to appeal to the FIFA's dispute resolution chamber if they are interested in regain control of the player they signed for about $40,000.

'The single Judge was eager to emphasize that the present decision regarding the authorization to provisionally register the player for Ugandan club is a provisional measure and, as such without prejudice to any decision as to the substance of any labour dispute between the player, Joseph Ochaya, and the Ghanaian club, Asante Kotoko FC,” the FIFA ruling on the dispute read which gives Kotoko hope.

Ochaya's lawyers argued that the contract with Kotoko was terminated by the player who claimed the Ghanaian club breached their terms of contract.

FIFA says Kotoko must now approach the Dispute Resolution Chamber of FIFA to provide its evidence to ensure that they regain control of the player.

“In particular it would be up to the Dispute Resolution Chamber (DRC) or any other competent decision making body to decide whether the relevant contract between the Ghanaian club and the player has been terminated by one of the contractual parties, whether with or without just cause, and who is to be deemed responsible for such possible breach. Equally the competent body would have to determine the possible consequences thereof,” the FIFA ruling revealed.

Kotoko can regain control of the player and recoup the money they spent in signing him from his former Ugandan club KCC.

After close to a year out of competitive football, Joseph Ochaya made his second debut for KCC FC following a clearance by FIFA to leave Ghana side Asante Kotoko.

The versatile player featured for 90 minutes as the Ugandan league champions beat Entebbe FC 1-0 in their 2014/15 Uganda Premier League second round opener at Bugonga, Entebbe.