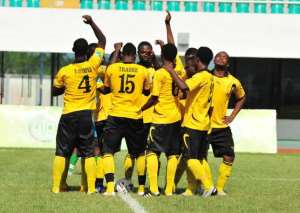 Obuasi Ashanti Gold march on as early leaders of the Ghana Premier League after a hard fought 1-0 victory over Liberty Professionals at the Carl Reindolf Park.  Bashir Hayford boys started with quick feet and had their noses in front two minutes into the game through Yakubu Mohammed. And it remained the only goal of the afternoon at Dansoman.

A pulsating end to end action with chances for both sides, but failure to put the ball in the back of the net meant the ended one-all. It was a game of two halves. First, for Ashanti Gold and the second,  for Liberty Professionals. Star man Kennedy Ashia was a torn on flesh of AshGold who were relaxed and controlled the game after taking an early lead.

The Scientific Soccer lads had a tough afternoon, though they had a very good share of possession but never took advantage of it. And Ashanti Gold went into the break with a goal advantage.  The second half was more of a do or die affair for both sides.