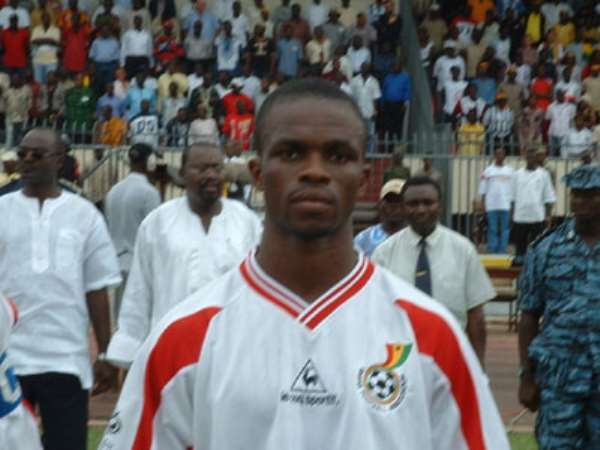 The sudden rise to stardom of Kumasi Asante Kotoko attacker, William Tiero, has surprisingly generated a fierce tussle over the issue as to who really owns the player.

Barely a month after Tiero's par excellent performance for the Black Stars in their World Cup qualifier against South Africa in Kumasi, Kumasi-based colt club, Kumapim Babies, has emerged out of the blue claiming ownership of the player.

As a result, Kumapim Babies are now demanding a refund of the $10, 000 transfer fee which accrued from the player's transfer from Feyenoord Salgado (now Fetteh Feyenoord Academy) to Liberty Professionals on February 19, 2002.

A notice addressed to the Managing Director of Feyenoord Salgado FC by Matthias Gollo and Co, solicitors for Kumapim Babies, dated July 20, 2004 stated that Akwasi William (William Tiero) registered and played for the colt club from 1995 to 1998.

However, Kumapim Babies' interest in the matter was apparently renewed after Tiero's recent exploits culminating in a follow-up letter to Liberty on July 14, 2004, giving them a 10-day ultimatum within which to respond or face legal action.

To buttress their claim further, Kumapim Babies stated that Ghana Football Association (GFA) Regulations forbid colts players from gaining a floating status until after three years of leaving their clubs.

The club, therefore, asked Feyenoord to refund the $10,000 (100m in cedi equivalent then) to them within 14 days for the wrongful sale of the player.

Feyenoord were also directed to either open negotiations with Kumapim Babies for the proper release of the player or face legal action for what they termed as “wrongful and unprofessional act”.

Meanwhile, Liberty Professionals have since replied Kumapim Babies, stating their version of the story. A letter dated July 19, 2004, and signed by the President of Liberty, Alhaji Ibrahim Sly Tetteh, expressed surprise at the turn of events since they had known Tiero, a.k.a. Akwasi William, to be a player of Feyenoord Salgado FC and therefore negotiated with them accordingly for the player's release.

While supporting their argument with a copy of the agreement which was reached between the two teams over the player, Liberty then referred Kumapim Babies to contact Feyenoord for further discussions on the status of the player.

Apart from the $10,000 Feyenoord earned from that transfer for the development and promotion of the player, the contract also stipulated that the club will also be entitled to a 30 per cent share of any amount Liberty would receive in future transactions concerning the player.

When contacted, the technical director of Feyenoord Academy, Mr Sam Arday, disclosed that the matter had been referred to the club's solicitors for the necessary action.

The Managing Director of Feyenoord, Mr Brokken Karel, who was involved in Tiero's transfer to Liberty, was not available to comment on the issue as he is currently on vacation in his native Holland.

The General Secretary of the GFA, Mr Kofi Nsiah, revealed to the Graphic Sports last Wednesday that he was yet to receive an official complaint on the issue from Kumapim Babies.

From all indications, the case might end up in the corridors of the GFA Player Status Commitee for the final judgement as it still remains a mystery as to why the colt club failed to make a case during the three to four seasons when Tiero featured for Feyenoord Salgado before eventually moving to Liberty