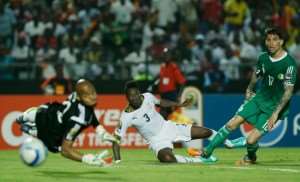 Top-ranked African team Algeria and four-time champion Ghana still have work to do to make the quarterfinals at the African Cup of Nations and avoid the severe embarrassment of an early elimination.

Both have lost once in Equatorial Guinea, ensuring their final games in Group C on Tuesday are loaded with pressure.

Algeria meets surprise group leader Senegal in Malabo and Ghana plays South Africa in Mongomo. For each, a win would guarantee a place in the last eight, but a draw could become complicated and bring in the tiebreaker rules to decide who progresses. Defeat means an early flight home.

Algeria — as so often happens with pre-tournament favorites at the African Cup — has found the going tougher than expected.  The North  Africans took time to get going against South Africa, then gave up a stoppage-time goal in a loss to Ghana.

Coach Christian Gourcuff  blamed the field in the remote far-eastern city of Mongomo for many of his team's problems, and promised they would be “more effective” at the stadium in the capital city Malabo.

That leaves no room for excuses against an unbeaten Senegal side that has pace, power and confidence — and needs just a point to go through.

Gourcuff has had a tough time over the past week. His mother died ahead of the Ghana loss and he has faced criticism back home for his tactics. Algeria's highly rated attacking trio of Islam Slimani,  Yacine Brahimi  and  Sofiane Feghouli  has yet to get going and striker Slimani will miss the Senegal game with injury, the federation said.

Add in the logistical problems of the border town of Mongomo, where the Algerians' hotel was more than an hour away from their rugged training field, and the squad is likely looking forward to Malabo.

“Some players are not happy,” captain  Madjid Bougherra  said of the time in Mongomo. “But it's OK … we are a family.”

For Ghana, that glorious run to the quarterfinals at the 2010 World Cup in South Africa is a distant memory.

A terrible World Cup in Brazil last year has been followed by early struggles at the African Cup under former Chelsea coach  Avram Grant . He had a hard introduction when Ghana threw away a 1-0 lead and lost 2-1 to Senegal with a goal in the dying seconds of its opener.

But captain and lead striker  Asamoah Gyan  is back now after a mild bout of malaria, returning to the team to score a crucial late winner against Algeria. His presence gives the Ghanaians a major lift.