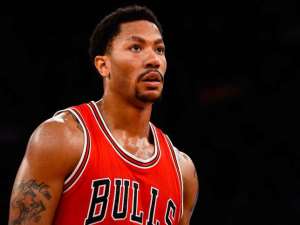 The 26-year-old walked to the bench in discomfort with under two minutes left in the fourth quarter at the Air Canada Centre, as the Bulls went 7-2 in the NBA on Thursday.

Rose's injury was a cause for concern for Bulls fans, as the point guard has missed the majority of the last two seasons with serious knee injuries and also had time away from court in the early stages of the current campaign due to sprained ankles.

However, Rose - who finished the match 20 points and four assists - is confident the latest setback is not serious.

"I guess it's cramps in my hamstrings," Rose told reporters. "But I think it's minor, and they decided to pull me out.

Rose admits he is not sure how the injury occurred, adding: "I don't know. Just missing two years, now you're just going to fall for no reason I guess.

"[I am] just trying to work every day, put in consistent work every day. And don't [want to] lose any confidence with these setbacks."